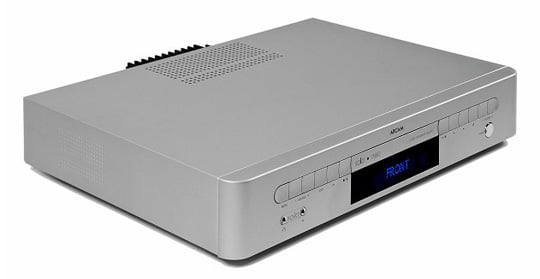 The Neo, like its predecessors, is designed to fit in easily, whether it’s in a rack with other separates or as a standalone hi-fi system. Its heavy aluminium chassis and densely packed components mean it weighs in at a hefty 7.75kg – portable it ain’t.

Arcam has stuck with the minimalist Solo design aesthetic with its silver-only livery punctuated by delicately recessed buttons on the front, above an ice blue LCD screen and a brace of 3.5mm jack sockets for headphones and MP3 players.

The CD player includes a low jitter Colpitts crystal clock, a 24-bit Wolfson DAC and is capable of handling CD-R and CD-RW discs. The Solo Neo will play WAV, MP3, AAC, WMA and lossless FLAC files either from disc or a hard drive, which covers the basics and a bit more.

There’s a USB input which might have been better placed at the front for connecting flash or hard drives, but it’s ensconced at the back where it joins four analogue source inputs and three outputs. Among these are connections for tape, a second zone and an additional power amp.

Other back panel interfacing includes an optical digital out and an Ethernet port for connecting to the Internet or a home network. There’s no phono input, however, so if you want to connect a turntable, you’ll need to source a separate preamp to hook up to one of the line inputs.

Accessory of the Week Sound investment?

Accessory of the Week The cradle will RAAAWK

Review Top of the docks