Whilst the included Cyberlink software appeared to work wonders with DVDs, I couldn’t initially say the same for Blu-Ray playback as every attempt made to watch a film ended abruptly in an error message stating “There is a disc with an unsupported format in drive H:.” 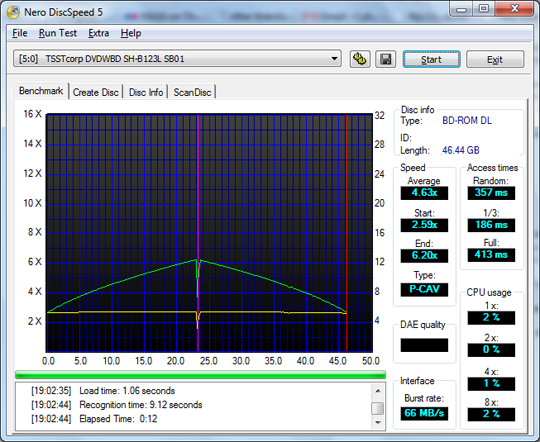 After consulting with the folk at Samsung and Cyberlink, the issue was determined to be caused by an unidentified item of software on my set-up. Not exactly a decisive conclusion, as whatever it was prevented PowerDVD from recognising the SH-B123 as anything more than a DVD±RW drive. Hence, a fresh and long overdue Windows installation on my test rig seemed in order. Thereafter PowerDVD was able to unleash the full potential of the SH-B123 and its impeccable Blu-Ray playback.

Whilst movie playback quality was flawless, I also benchmarked the drive with Nero DiscSpeed to see if Samsung’s 12x read claim is accurate as there will be some looking upon this device as a fast rip drive to extract optical goodness for their media playing pleasure.

Although the drive did peak beyond 6x – which is more than a typical 8x drive will actually obtain with a generic disc – the full 12x potential was not seen. Perhaps with a perfect pressing it might be achievable, but it appears to be out of reach for your off-the-shelf Blu-ray movie. 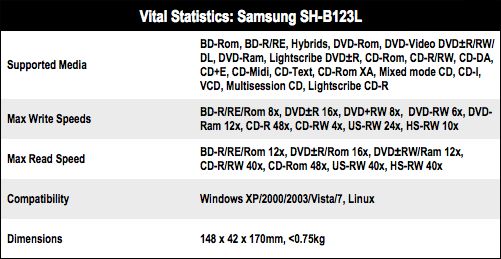