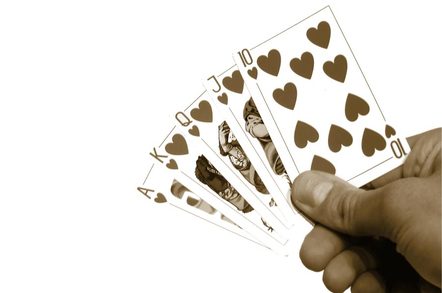 The world's two largest poker sites, PokerStars and Full Tilt Poker, are battling to keep poker bots off their sites.

In October, Full Tilt removed an unstated number of players, confiscated the funds in their accounts, and pledged to redistribute this money to players who'd lost to the bots. PokerStars took similar action with 10 accounts in July.

Poker sites are paranoid about their customers thinking there are bots on the site - either run by their customers or the site themselves. People running bots are convinced the sites use them too, though not necessarily to thrash the customers, but to always provide opposition to keep the games going.

The sites don't like to discuss bots at all. In a customer email regarding the latest bot cull, Full Tilt stated “For a number of reasons, we are unable to provide additional information regarding this case, including the players involved and the game type where it occurred.”

Running bots is against the Ts & Cs of all online poker rooms. It's not illegal, but it means the sites can kick off bot players and seize their account cash...

How to spot a bot

And how are the bots spotted? Poker stats sites like Poker Table Rankings analyse the performance of online players. It even offers a 'Human Robot Score' which it states “attempts to determine if the playing habits of a player are within the realm of human abilities".

This score is based on a composite of a variety of factors including the length of their sessions, the standard deviation of those lengths, times played, and consistency of play schedule. A player rated 0 has entirely unpredictable play habits and a player rated 100 would have extremely consistent, almost impossibly long sessions with extremely low variance in length or schedule. "We leave interpretation of this score up to the user.”

But Dave Martin of PTR says the site doesn't actually use the "bot score" to conclude with certainty that a particular player is a bot. "It turns out that many bot operators run their programs on multiple accounts at the same time. We developed a mathematical grouping algorithm that uses the 400+ stats in our database to find groups of players whose play is too similar to be explained by mere chance. We often find groups of 10 or more players playing exactly the same." You can see an explanation here.

PTR went public, and named and shamed the PokerStars bot players before the site had kicked them off.

The sites can also run their own analysis and investigations. The company Pocket Kings provides technology and marketing consulting services to the online poker industry, and its main client is Full Tilt. Up until the summer, its head of data analytics was Dr Darse Billings, the biggest name in poker bot development. Billings has played poker professionally, led the University of Alberta's Poker Research Group, and still acts as a consultant there.

He now describes himself as a problem solver, “defining algorithms to solve hard problems (eg combinatorial optimisation, abstract strategy games, stochastic games with imperfect information, etc). Justifiably he says he's behind the “world-best AIs for poker, board games and puzzles”.

If anyone can spot a bot (or write one), it's him. Billings says the poker sites don't run their own bots. “I can't imagine any legitimate online poker site ever using bots unbeknownst to its players. That would be a colossally stupid business decision, because the business is so dependent on a relationship of trust with its players. The sites make millions by offering the service of a fair game, and I don't know of any site that doesn't understand that perfectly.”

As for player bots, he knows they can be written, but has dismissed off-the-shelf bots as “shit” in the past. This is interesting because Full Tilt's investigation revealed that software by off-the-shelf bot company Shanky Technologies was behind its bot problem. On its site Bonus Bots, it offers bots that can play a variety of poker games as well as blackjack. Shanky Technologies used to claim its bots were undetectable, but since its customers have been kicked off Full Tilt, it is now whining that this is unfair and that Full Tilt had tolerated bots for a long time.

In a statement, Shanky said: “There was no warning given to anybody, and this was after years of tolerating us to such an extent that most of us felt they welcomed us with open arms. To be certain, the use of such software has always been against their 'official' terms of service. We all knew that. But for the past few years that part of their agreement was always perceived as being given with a wink. There are hundreds of us who have been active there on a daily basis and the overwhelming majority of us have never heard so much as a peep out of them.”

Billings, speaking before bots on Full Tilt were revealed, said it “wouldn't be easy to write good programs for most poker variants, but if you're asking if it might eventually be feasible, then I'd have to say yes.”

US prosecutors: Hey, you know how we said 'net gambling was OK? LMAO, we were wrong