Such a huge lens in an otherwise lightweight body does obviously create stability challenges. Pentax has commendably resolved these by implementing a sophisticated and effective system of image stabilisation that works by detecting and compensating camera shake through a gyro sensor that moves horizontally and vertically at high speed over the CCD sensor. 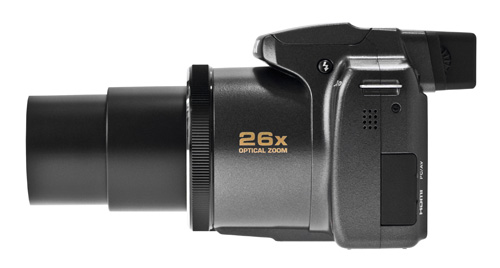 Pentax claims its proprietary CCD-shift-type Shake Reduction system will give photographers a three stops advantage. I haven’t measured it but the telephoto results at maximum telephoto range are very good indeed for this category of lens.

Pentax also added two digital shake reduction options: Pixel Track SR (Shake Reduction) compensates for camera shake by processing affected images during recording. The High-Sensitivity anti-shake mode works by raising ISO sensitivity to the highest settings in poor lighting to enable the use of faster shutter speeds. Stabilisation systems aside, the only real disappointment is that the optical zoom cannot be accessed during movie recording.

The camera performance is generally better than average. The X90 is quick to power up in just over a second, shot-to shot times are around 2 seconds and it has burst speeds of up to 11fps at the reduced resolution of 5Mp.

The Autofocus system is very fast and accurate in normal lighting and outdoors conditions but it does slow down at long focal lengths and it sometimes gets stuck in very low light levels. Manual focus is not really implemented and it looks as though Pentax has added a so-called manual focus option only for spec’s sake.

Manual focus is controlled from the navpad in incremental steps, rather than through the conventional ring on the lens barrel, which is spookily there just for aesthetic reasons. This jerky and slow control makes it all but impossible to manually lock focus on anything other than still objects. 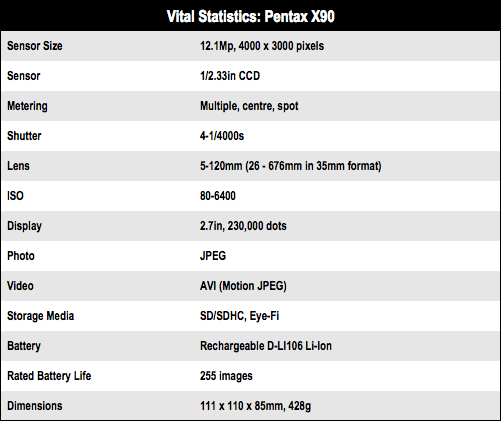 Real world review Did we mention the worse battery?