NASA's former Deep Impact comet-bomber space probe, since renamed EPOXI* and reassigned to rendezvous with a second space snowball, has made a successful close pass by the comet Hartley 2. 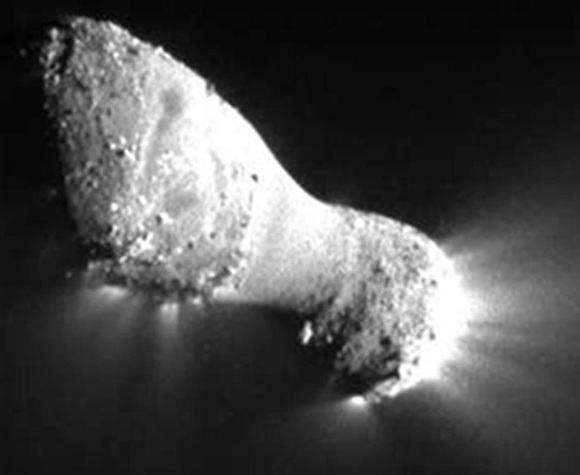 "The mission team and scientists have worked hard for this day," said Tim Larson, EPOXI boffin at NASA's Jet Propulsion Laboratory in California. "It's good to see Hartley 2 up close."

According to space-agency spokesmen, "preliminary indications" are that EPOXI was about 700km from Hartley 2 at closest approach, roughly what had been planned. This was at just before 2pm UK time, and since then pictures and data have been beaming down from the craft to NASA's Deep Space Network receivers.

The Deep Impact spacecraft lifted off from Earth in January 2005, rendezvousing with the comet Tempel 1 in July that year and successfully smashing an impact probe into it, gaining valuable data on the makeup of the comet. NASA then assessed that the probe still had plenty of manoeuvring fuel left and that, by means of judicious low passes above Earth, it could be steered to a new rendezvous with another comet.

The most recent gravity-assist low pass above Earth took place in June, with the spacecraft picking up an additional 3,470mph of velocity as it zoomed just 19,000 miles above the South Atlantic before heading out into space once more in pursuit of Hartley 2.

There will be further briefings on the Hartley 2 pass later on NASA TV: full details and some more early pics can be seen here. ®