A word on the design. The phone looks great in dark or silver colours, but not so great in bluebottle blue or lime green, or garish copper. Nokia's colour palette is completely at odds with the phone here: the design and materials say "Mercedes" but the colours say "iPod Nano". The phone looks very out of place on a business professional in a suit. Nokia Design has been very good at choosing its palettes until fairly recently – now it seems to be incoherent. A wider choice of more muted hues would have been welcome. 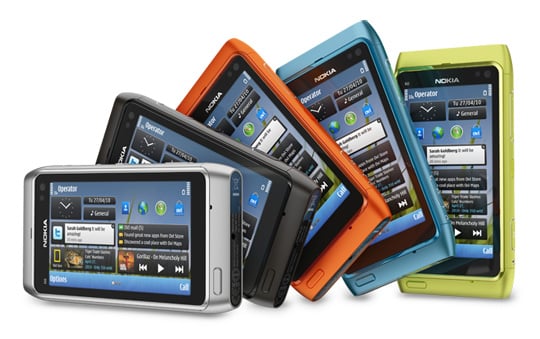 A colourful range, but not exactly tailored for business suits

HDMI support is the big feature here. The port's on the top, the most sensible place to put it and, like the Sim and MicroSD slots, it's covered by a fiddly door. An HDMI adapter is included in the box. Once it's connected, you can stay on your sofa and control the device from a Bluetooth keyboard – a nice touch.

I found scrolling through the music library much improved – it's an area that really benefits from the optimizations in Symbian^3, and the better hardware. It was fast and dependable, and includes a rip-off of iTunes Cover Flow browsing mode. Another feature borrowed from the iPhone is "browse by letter", which worked very well. Browsing the local image and video collection is similarly dramatically enhanced, being the most noticeable area of improvement between the N8 its Nokia predecessors.

Syncing with a PC is still problematic, however. Once it's working, it's very speedy. Initially, I couldn't get a successful cable connection to my Mac, and had to hook up using Bluetooth. The second attempt was successful though. However, the first attempt had buggered up the media player on the phone and it displayed a permanent "Media transfer in progress" dialogue. The only way I could get rid of it was to reboot the phone.

Nokia includes 16GB of storage, enough for a decent portable library. A native BBC iPlayer client is included, which supports DRM, so you can take shows with you to watch offline. An FM transmitter is featured, as is an FM radio. Yet there are some curious omissions. There's no Podcasting or Internet Radio app – both by now should be integrated into the music player. (You can download a new beta Podcast app here). 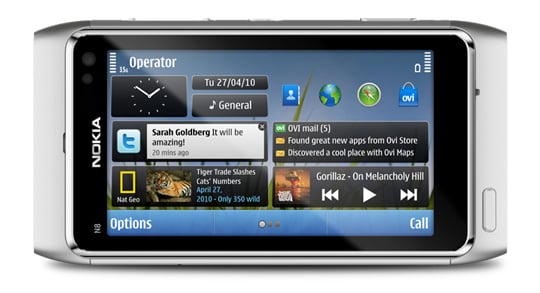 The apps are a bit of mixed bag

Currently, Symbian^3 lacks DLNA support, which I rather missed. Nokia's Symbian implementation of this (called "Home Media") is excellent, as I discovered when testing Nokia's HD-1 Home Music centre – it acts like a remote control and DLNA-enabled handsets can perform similar tricks.