Carphone Warehouse has updated its Samsung Galaxy Tab sales page with a price: £530 without a data contract, or £500 if you take out a tenner-a-month data deal with Talk Mobile. 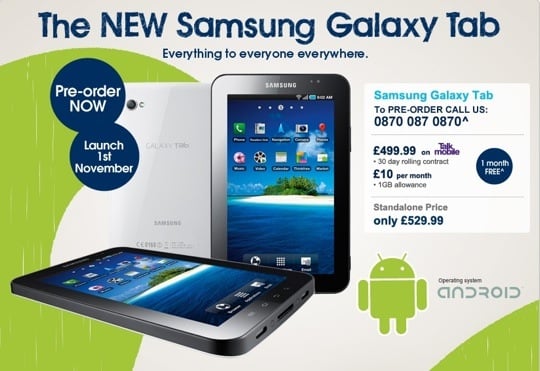 That's certainly less than the £600 Amazon.co.uk wants - marked down from an £800 RRP, the site states - for the 7in Android 2.2-based, 3G-enabled tablet, and presumably CW hopes that the (slightly) even cheaper airtime-bundled offering will appeal to punters even more.

The £10 deal operates on a 30-day rolling contract and includes a gigabyte of data transfers.

The CW price puts the Tab right up against the 16GB 3G-enabled iPad, which retails without airtime for £529.

Vodafone and Three have said they too will offer the Galaxy Tab when it ships on 1 November. Neither has said how much they will charge for it. ®