On December 17, IBM will start peddling CloudBurst V2.1 configurations based on its Power 750 midrange Power7-based server. The Power 750 is the workhorse box in the midrange, and you might be wondering why IBM didn't stick with blade servers and use the new PS701 blades. The answer would seem to be more about performance and memory expandability than blade or virtual-machine density.

The PS701 blade has eight cores and a single socket, and the chips only spin at 3GHz. You can put ten logical partitions on each Power7 core, and this is the ratio that IBM is using to size up the CloudBurst V2.1 stacks based on the Power 750s. So if you do the math, if you took a base CloudBurst and yanked out the three base HS22V blades and replaced them with three PS701 blades, you should, in theory, be able to host 240 VMs using IBM's PowerVM hypervisor. That's more than twice that of the 108 VMs you can set up using the HS22V Xeon blade. Still, even at five VMs per core, the PS701 blade should have been fine at 120 VMs.

It's a mystery, and one that IBM does not explain. My guess is that IBM has Power 750 clusters sitting around, waiting to be loaded with either PureScale database clustering or CloudBurst configurations, and that — for whatever reason — Unix shops tend to prefer racks to blades and hence IBM's preference in the CloudBurst machines.

IBM doesn't sell a two-socket, single-width Power7 blade server, but you can make a two-socket blade by snapping two PS701s together — it's called the PS702 — but that doesn't improve the density at all, even though it does allow for tight SMP clustering of the two blades.

What IBM really needed was a two-socket PS711 blade server — and to put faster 3.72GHz processors in these blades, as well. And then it needed to put this into the CloudBurst setups while at the same time proving the VM density is better than on Xeon-based blades for the same performance on equivalent workloads — if this, in fact, turns out to be the case.

All IBM does say — rather vaguely — is that compared to standalone, physical x64-based servers, a Power Systems cloud based on the CloudBurst setup can be between 70 and 90 per cent less expensive on a cost per image basis than standalone x64 machines or public clouds — presumably Amazon EC2. There's no quantification for that claim, or a relative metric for the x64-based CloudBurst setups. Presumably they are even less expensive, but maybe not, given what VMware charges for ESX Server.

The Power 750 nodes used in the Power variants of the CloudBurst V2.1 stacks cram 32 cores and up to 512GB of main memory into a 4U chassis. The Power 750 does not support the higher 3.72GHz or 3.86GHz clock speeds available on other Power Systems machines, and it is a relatively expensive box. It does support 3GHz and 3.3GHz chips as well as very pricey 3.55GHz ones.

Here's what the Power 750-based CloudBurst V2.1 small, medium, and large configurations look like: 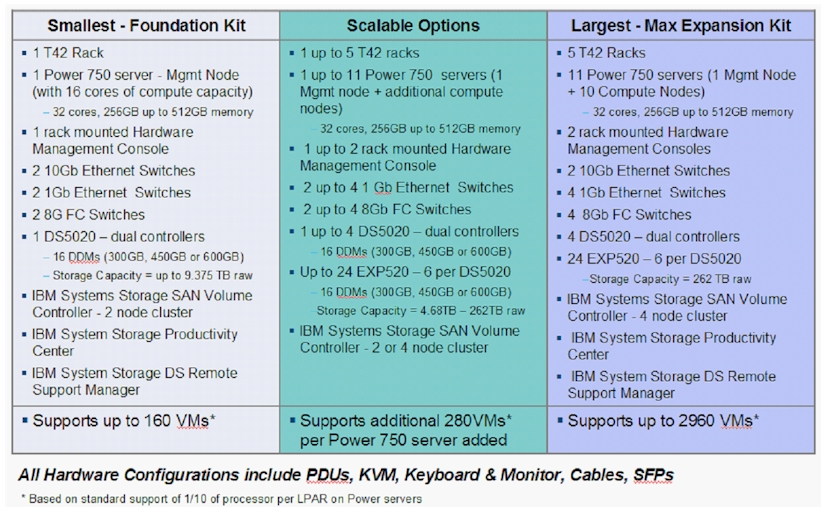 IBM is using 16 cores in the first Power 750 to run the management software for the CloudBurst, and can put up to ten additional Power 750s, plus DS5020 disk arrays, EXP520 expansion units, SAN Volume Controller, and all the switching gear needed to lash it all together across five racks. The base machine supports 160 VMs on the 16 spare cores in that single Power 750 machine, while the five-rack CloudBurst can host 2,960 VMs. The Power-based setups are using beefier disk arrays and have storage virtualization built in from the get-go.

Pricing for the Power version of the CloudBurst setup was not available at press time. ®