Scientists at the University of Cincinnati have come up with what they claim is the acme of mobile display technology: a screen that's cheap, able to present content clearly even in bright sunlight, able to retain an image even when there's no power and yet, unlike e-ink screens, can refresh quickly enough to play video.

And, potentially, to do it in colour.

The researchers - from the Novel Devices Laboratory in the University's School of Electronics and Computing Systems, working with the help of companies Gamma Dynamics, DuPont and Sun Chemical - call the screen an electrofluidic display. It uses two immiscible liquids, a clear oil and a pigment, placed in two connected layers with an aluminium electrode sandwiched in between that's capable of reflecting light. 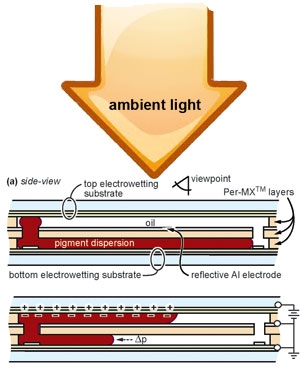 The boffins claimed the reflector has a white reflectance of greater than 70 per cent - well above that of rival bright-light readable screens and close to paper's 80 per cent reflectance.

Pixels are flipped from dark to light by applying a voltage to electrodes that drives the two liquids from one layer to the other. When the oil is in the top layer, light passes through and you have a 'white' pixel. The pigment blocks the light when it's on top making the pixel 'black'. 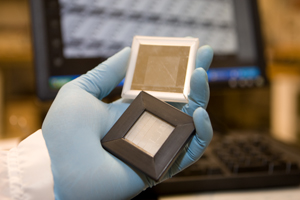 "When the pigmented substance is positioned in the top layer... it creates a reflected ray of coloured light which combines with literally millions of ambient light rays to produce a full-color display," the scientists say.

Power consumption can be cut further because the liquids stay where they are unless propelled by the charge. Their positions are held by a Laplace Pressure - the difference in pressure between the inside and outside of a bubble.

The upshot: the image is retained when the power is cut, just as it is with an E Ink screen.

In a paper published in the journal Applied Physics Letters, the Cincinnati team discuss a greyscale screen rather than a colour one, and one that's not yet able to update sufficiently quickly to do video. 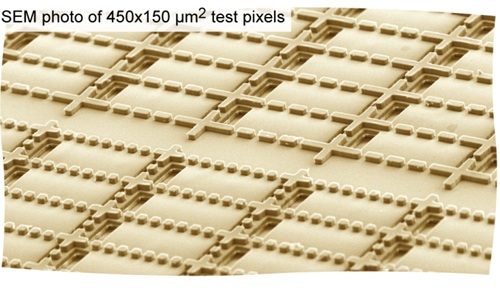 Their test display has 450µm pixels, which are large, but they calculate that if they can get the pixel size down to 150µm, the speed at which the fluids can move - essentially the pixel switch speed - will be "consistent with video rate operation", ie. 20ms.

Such as screen, they believe, can be produced in existing LCD plants, saving manufacturers from the need to build new factories fitted with new tools - all at significant cost. So the screens, if they come to mass-production, should be cheap too. ®