* source code does not include $80,000 construction fee

The enterprising Googlers who created an immersive setup that uses eight 55-inch HD displays to surround you with a near-360° Google Earth fly-through have open sourced the code and mechanical plans for what they call their "Liquid Galaxy".

"With the Liquid Galaxy, we ... fly through the Grand Canyon, leap into low-Earth orbit, and come back down to perch on the Great Pyramid of Giza without even breaking a sweat," Jason Holt, a Google software engineer and member of the Liquid Galaxy team wrote when introducing the system last December.

In a Thursday blog post appropriately entitled "A galaxy of your own," Holt said that since the Liquid Galaxy's creation, "We've taken it to a lot of conferences, built Liquid Galaxies in Google offices all over the world and even put one in the Tech Museum in San Jose, California."

However, Holt admitted, "We just couldn’t bring it to enough people — we could only go to so many conferences, and only friends and family of Googlers could try out the Liquid Galaxies in our offices." 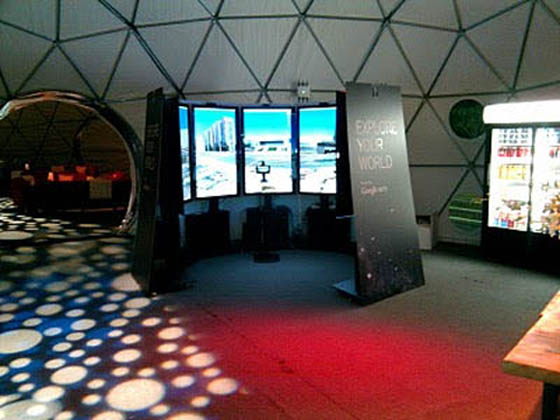 The solution was obvious. "We decided to put the features that make Liquid Galaxy possible into the latest release of Google Earth, and open-source all the supporting work, from our Ubuntu sysadmin scripts to the mechanical design of our custom frames."

If you're interested in making a replica of a the Googly Liquid Galaxy, prepare for a bit of an investment. Holt's team's version requires one server for each of eight 55-inch 1080p displays, a 3DConnexion Space Navigator controller, and other hardware, all housed in a panelled almost-circular enclosure. 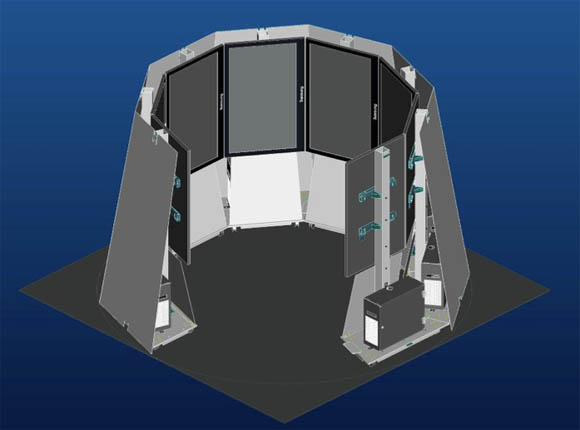 If you're prefer, however, to forego the installation hassles — and if you have $72K to $80K burning a hole in your pocket — Google's partner End Point will be glad to build one for you. Should those prices be a wee bit too rich, they can also assemble three- or five-screen versions as well.

But if you're both rich and courageous, download the most-recent version of Google Earth (5.2.1.1588), then check out the project's home page, where you'll find links to such help as a QuickStart guide, which describes how to set up an entry-level Liquid Galaxy on a two-display system, the complete LiquidGalaxyHOWTO, a PDF of the Mechanical Installation Guide, and more.

After all your time, trouble, and money, you'll own not only a mind-bending earth-exploring machine, but also a place to watch wrap-around video and the way-coolest game setup imaginable. Cube 2: Sauerbraten, anyone?