Review Nokia's midrange C6 is effectively a budget version of last year's N97 but still manages to pack in a slide-out Qwerty keyboard, Wi-Fi, HSDPA, a 5Mp camera and A-GPS with turn-by-turn satnav as standard. Being the C6-00, it runs on the Symbian S60 5th Edition, unlike the C6-01 unveiled at Nokiaworld this month, which runs Symbian^3 and won’t hit the shelves before the end of the year. 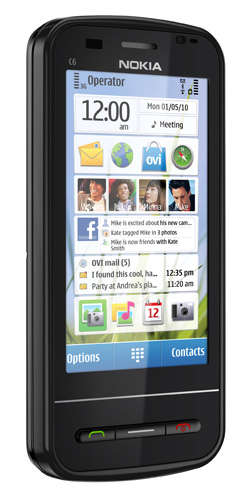 The C6-00 is a bit of a brick, at 113 x 53 x 17mm and 150g, largely due to the slide-out keyboard. At first glance it looks very similar to the N97, but with a cheaper, more plasticky feel. It doesn't do that angled screen thing either, as the keyboard merely slides straight out, which isn't as fancy, but that's no great loss. More worrying is that the top half of the phone sits a bit high on the bottom half, with the result that it feels a little wobbly when closed.

The keyboard is a good one, with 39 backlit keys made from tactile rubberised plastic. They're slightly raised in the middle, so they're easy to find under the thumbs, plus there's a large five-way navpad for navigation. There's a decent amount of travel and feedback in the keys too and my only gripe would be that there's room for more alternative key options for symbols and punctuation – ten keys have no alternate options at all, which seems like a waste.

The screen measures 3.2in and offers 640 x 360 resolution (nHD, as Nokia calls it) with 16.7 million colours. It looks beautifully sharp and colourful, but it's resistive rather than capacitive, which is never a preferable option. That said, it's reasonably sensitive, and not too frustrating to use.

Beneath it is a sliver of three hard buttons for call start and stop plus a menu button. The sides feature a volume rocker, screen lock switch, camera shutter and a MicroSD memory card slot hidden under a plastic grommet. As we've come to expect from Nokia, it comes with a memory card as standard, in this case 2GB. 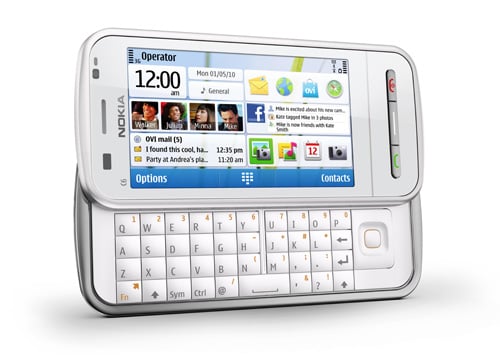 Slide out keyboard, but no tilting screen

The power slot is on the bottom, while the top has a 3.5mm headphone jack and micro USB power/sync slot beneath a grommet. The back features the 5Mp camera lens and LED flash and, incidentally, there's a QVGA camera on the front for video calls.