Convirture aims around VMware to hit Xen and KVM

I meant to write about these guys earlier, but a vacation (and general laziness) kept it from happening in a timely manner.

I recently had a briefing with Convirture, a startup that is striving to bring the full slate of virtualization bells, whistles, and management tools to the Xen and KVM hypervisors. Our pal TPM wrote a nice piece here that gives you the lowdown on who they are and what they’re bringing to the table.

What I’m bringing to the table is a bit of wide-lens perspective. In the x86 virtualization game, VMware is the acknowledged big dog – it pioneered the market and rolled out a commercial product before Xen really got its collective open source-based act together. The VMware hypervisor was a sensation, driving much high-margin revenue to the company. It also became the favorite dance partner of every x86 vendor, appearing in almost every HP, IBM, and Dell slide deck and sales proposal. 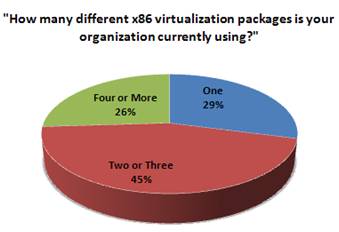 However, VMware – as dominant as it is – isn’t the only virtualization game in town. Our recently completed x86 data center survey asked 200 enterprise x86 data center managers and assorted staffers a long list of questions. (It was probably pretty tedious to complete, but it yielded some great data.) One set of questions covered virtualization - we asked these customers what they were using and how much they were using it.

What we found is that the large majority of customers (71 per cent) haven’t settled on a single x86 virtualization solution. Although 82 per cent of our survey respondents said that they are using VMware on at least some of their systems, we found that Xen variants from Citrix, Sun/Oracle, and Xen.org were being used by more than half of the customers we surveyed. Another 31 per cent of customers said that they use KVM.

This is the opportunity that Convirture is shooting at. It wants to provide VMware vSphere-like capabilities to Xen and KVM users. If our survey is any indication, there are a lot of enterprise customers using Xen and KVM. Many of them would love to see advanced management features and functions, and some of them would be happy to pay for it.

Convirture is betting that VMware and Microsoft won’t get enough of the market to crush Xen and KVM like bugs. I think the evidence so far shows that customers aren’t in a hurry to standardize on a “One True Virtualization Solution”. The offerings differ enough in terms of technology, capabilities, and pricing that customers can see clear reasons to use VMware for one set of workloads and Xen (or KVM or Hyper-V) for another.

As long as this continues, there will be at least a niche for Convirture and companies like it that are building an ecosystem based on the ‘other guys’ … ie Xen and KVM. ®

VMworld US No, we're not pulling your leg