Authentic Navy rum: Yours for £600 a bottle

Those of you with a taste for rum and 600 quid to spare might like to uncork a bottle of Black Tot "Last Consignment" British Royal Naval Rum, lovingly decanted from the official stocks held by the Senior Service since sailors' final rum ration in 1970. 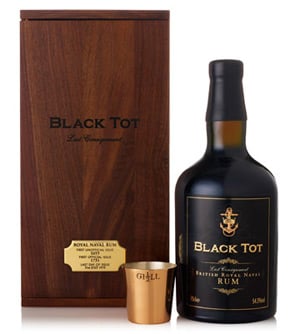 On July 31 of that year, at precisely six bells in the forenoon watch, Jack tars were issued their ultimate hit of rum on what became known as "Black Tot Day".

The remaining rum - likely imported from the West Indies in oak barrels by official supplier ED & F Man & Co - was poured into stone flagons and transferred to HM bonded warehouses, where it lay undisturbed, apart from tapping for the odd state occasion.

Six thousand bottles of Black Tot rum have now been released to landlubbers to mark the 40th anniversary of Black Tot Day. For your £599 you get a 70cl bottle* of 54.3 per cent strength rum in a custom wooden box, complete with 80-page history of naval rum by spirits author Dave Broom, a certificate of authenticity and, crucially, a half gill copper cup to dispense the correct ration.

It's available online here, and there's more on this expensive piece of naval heritage here. ®