The MessagePad 120 is relatively straightforward to open up, either for simple repairs or just to satisfy nerdy curiosity — PDA Soft provides a clear set of take-apart instructions.

Back in the mid-1990's, however, snap-in wiring connections were more rare than they are today, so breaking an opened-up MessagePad 120 down into its constituent parts requires some soldering-iron dexterity, a skill I don't possess.

So here's my 120, merely opened up, and not fully disassembled — I didn't want to risk murdering my old friend. 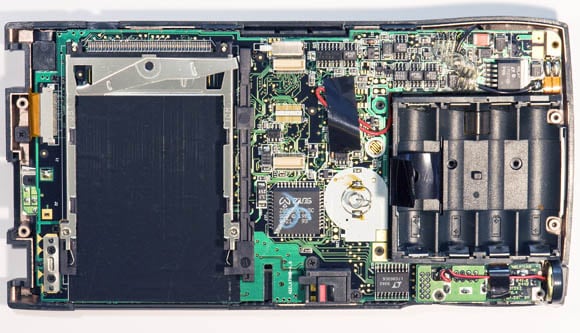 Lying face down with its bottom removed, the battery bay (right) and PCMCIA card slot (left) dominate the MessagePad 120's main circuit board. Note that board-component spacing and layout is rather relaxed when compared to that of current handhelds. 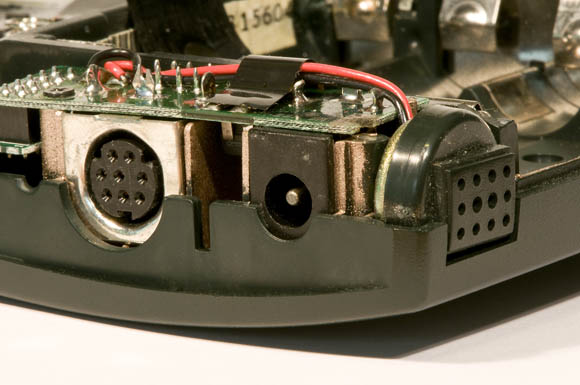 Remember that DIN-8 serial port and speaker from a few pages back? Here they are again, en déshabille, flanking the MessagePad 120's seven-volt power input. 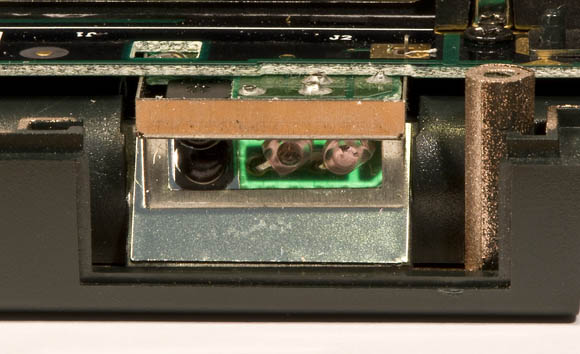 The rear-facing infrared port uses a 1.5-by-1cm mirror to bounce the signal up to two horizontally mounted IR sensors and down from its one IR emitter. 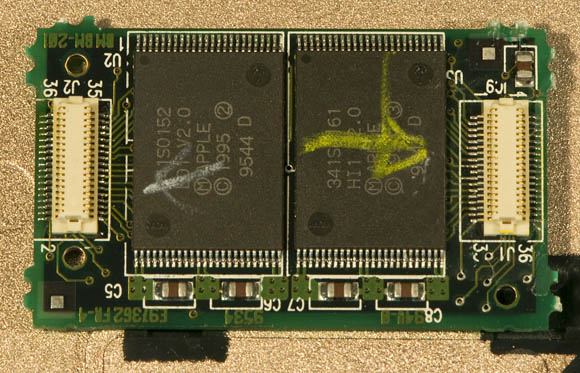 When running Newton OS 1.3, the MessagePad 120 had 4MB of ROM; when upgraded to OS 2.0, that ROM doubled to 8MB. These two Apple-branded chips, unlike any other of the 120's circuitry, ride on the handheld's bottom cover. I wouldn't bet my 'Pad on it, but my presumption is that they're the 120's OS-housing ROMs.

The two (ROM?) chips in the previous photo, mounted on the 120's case bottom, interface with the main circuit board mounted in the case top through the two sockets on the right and left of this photo. 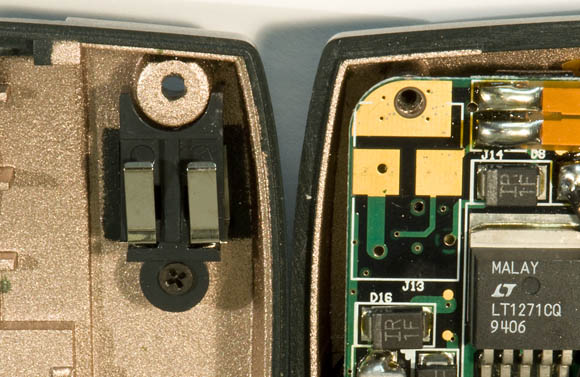 As mentioned above, Apple offered an optional NiCad Battery Pack for the MessagePad 120, which was charged through — what else? — an optional MessagePad 120 Charging Station, which was simply a dock into which you could slip your 'Pad or battery pack. Contact was made through two external pads, which then led through the bottom of the 120's case (left) and made contact with small pads on the the circuit board (right).

Next page: 'This is the end / Beautiful friend'
Page:
Tips and corrections
56 Comments