Colombian cops thwarted a cunning cocaine smuggling plan when they seized a replica of the World Cup fashioned from Bolivian marching powder. 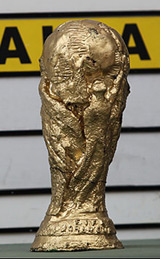 The trophy was detected by security checks at a mail warehouse at Bogota airport, packed in a box destined for an address in Madrid.

The statuette is 35cm high and packing no less than 11kg of cocaine, according to anti-drug chief Colonel Jose Piedrahita.

It had been lovingly crafted from nose Ajax mixed with a moulding agent, probably gasoline, according to the authorities.

The charlie World Cup, on the other hand, could earn the owner way over a million quid, depending on the current street price and how he cuts his prize. ®