Review The main reason for wanting a compact PC is lack of room on or under a desk. The Gateway DS50 is not SFF in the Asus EeePC terms, but in the sense of something roughly half the volume of a midi-tower. It still has room for a full-height DVD rewriter, a 3.5in hard drive inside the case, an internal power supply and a 95mm cooler over the Core i3-530 processor. 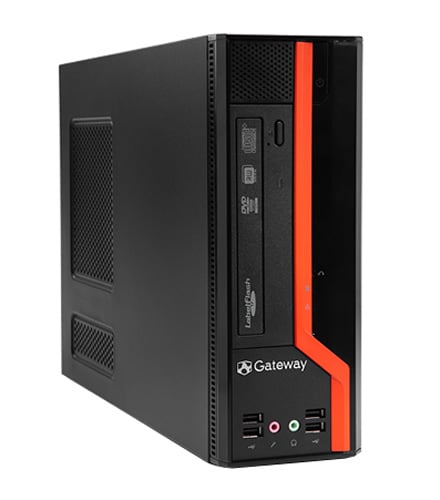 Gateway DS50: packs in a full-size a 32x DVD rewriter

Gateway says the DS50 is aimed at small businesses in need of a machine for more than core word processing, spreadsheet and Internet work. The company highlights multimedia editing as a task suited to the machine, so 3D rendering and video editing should be up its street.

What it isn’t is a games PC – the integrated Intel HD graphics in the Core i3-530 aren’t up to the frame rates demanded by this year’s games. Nor is it a home cinema machine, though it could be adapted. The machine has two, half-height PCI Express slots, one x1 and the other x16, so it would be feasible to fit a TV tuner – or to plug in a USB one, a wireless network card and to replace the DVD rewriter with a Blu-Ray drive.

Two large perforated panels on the side offer enough airflow to keep the CPU very cool, but do mean, if you choose to position the machine flat, that you have to be very careful with spills. Upright makes more sense, though you then only have the two tiny lugs on the rim of the DVD tray to stop discs falling out.

2GB of 1066MHz DDR3 memory is enough for most Windows 7 functions, though if you want to do heavyweight video or rendering work, you can increase this to a maximum of 16GB. The 320GB SATA hard drive might also need supplementing in this environment and, although there’s no room inside the case, there’s an external SATA socket on the back panel.

There are also six USB 2 sockets there, with a further four at the front, with audio interfacing for the embedded 5.1 audio, split between front and back panels. Gigabit Ethernet is supported, too, and there’s a legacy serial port, but no Firewire. USB keyboard and mouse are provided in the box and, while these are reasonably comfortable, they’re no better than sets you can pick up for £20 or so.

Europe's home PC buyers reach for their collective smartphone, sigh: We don't need a new desktop. This is a computer, right?