Microsoft is throwing the combined might of Hollywood, the record labels and the games industry at Google with its latest Bing update.

On Tuesday evening the company unveiled Bing Entertainment, which provides the ability to search, view and - depending on the medium - purchase films, TV, music and games.

Microsoft called the update, announced at an event in Los Angeles, California, one of the biggest investments it's making in the area of entertainment.

No kidding. Hosting the event, modestly billed by Microsoft as being focused on the future of entertainment, was Ryan Seacrest - presumably taking a well-paid break between seasons of American Idol. Seacrest reportedly pulls down $15m per season for hosting a talent-cum-popularity contest that until this year had Simon Cowell on its panel of judges. 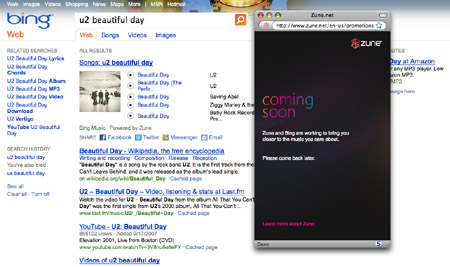 The entertainment market is Microsoft's latest big investment in Bing to grow its search share against Google. A year into Bing, Microsoft's search properties in the US have hit 12 per cent of the market.

And it seems Bing's entertainment landgrab will further challenge the metrics used to judge and measure this market. comScore earlier this month said Microsoft and Yahoo! had experienced market share gains in part because of they are using "contextual search approaches" such as those in Bing Entertainment that tie content and related search results together.

Entertainment is Microsoft's latest vertical to get the integrated search touch, following travel and shopping.

On music, Bing search results will now pull back tunes, album covers and - theoretically - the ability to play and buy through integration with Microsoft's Zune service.

I say theoretically, because a search for U2's Beautiful Day pulled back an error message saying integration with Zune wasn't yet complete. Microsoft claimed there's also integration for one-stop purchases with iTunes and Amazon.

Searching for films and TV, Microsoft has followed Google through integration deals with Hulu, Viacom and CBS and others that sees Bing pull back videos of episodes. Clicking takes you through to the service providers' site where you can view the videos.

A search for movies produces a show times tab in Bing that presents a synopsis of local cinema listings. For games, meanwhile, Bing has aggregated games reviews, cheats and walkthroughs. ®