Manufacturer MSI has released a utility for its Windows-based computers that will allow them to charge Apple iPads more quickly.

The tool, i-Charger, is an application that ups a USB port's power output from 0.5A to 1.2A. While the iPad will charge over a regular, half-an-amp power feed, it prefers the higher rating. 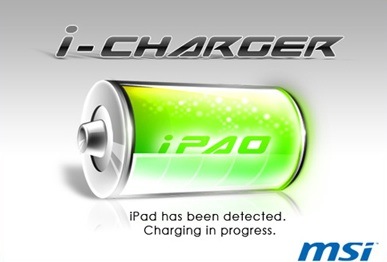 i-Charger detects the presence of an iPad, and ups the Amp value accordingly, MSI said.

It's surely a testament to just how popular MSI expects the iPad to be that it has taken the time to offer the tweak, which it presumably sees as an important differentiator to separate out its products from rival offerings.