NASA's Solar Dynamics Observatory (SDO) has demonstrated its "unprecedented new capability" by firing back some impressive first images of the Sun, including this "full-disk multiwavelength extreme ultraviolet image", captured on 30 March: 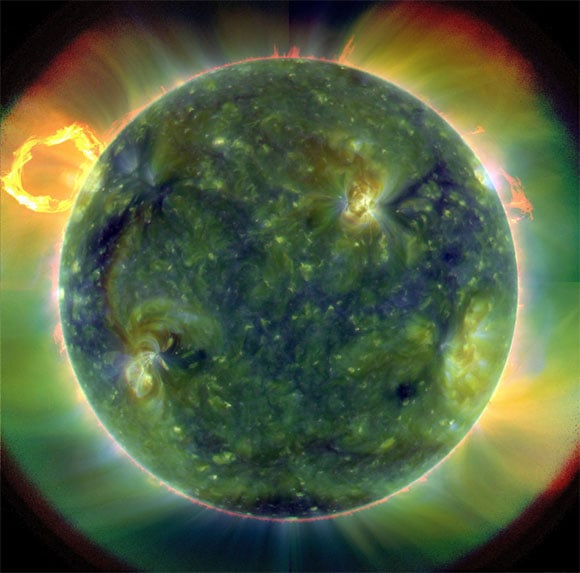 SDO launched on 11 February on its mission to "determine how the Sun’s magnetic field is generated, structured, and converted into violent solar events like turbulent solar wind, solar flares, and Coronal Mass Ejections".

The observatory is equipped to snap a "full disk image in 8 wavelengths every 10 seconds" at a resolution of 4096 x 4096 px and dispatch its data back to Earth at the rate of 1.5 terabytes per day, "which is equivalent to a daily download of half a million songs onto an MP3 player", as NASA quantifies it.

Richard Fisher, director of the Heliophysics Division at NASA Headquarters in Washington, said of the first results: "These initial images show a dynamic sun that I had never seen in more than 40 years of solar research. SDO will change our understanding of the sun and its processes, which affect our lives and society. This mission will have a huge impact on science, similar to the impact of the Hubble Space Telescope on modern astrophysics.”

NASA has more on the first images here. ®