39Mp upgrade for your 50-year-old camera, anyone?

Being fast at loading such film was a necessity - you could do it quickly without needing to watch your hands! Also it is worth mentioning that the results were not instant; even with a Polaroid back' you were 2 mins away from seeing if you were on the money with an exposure. So metering with handheld devices was second nature and the only way of gaining the correct exposure, as these cameras had nothing built in. And in some cases it was reflective light that you were reading, or it could be ambient depending on the subject. I found it to be a time of interpretation of the results too – less science, more feeling. 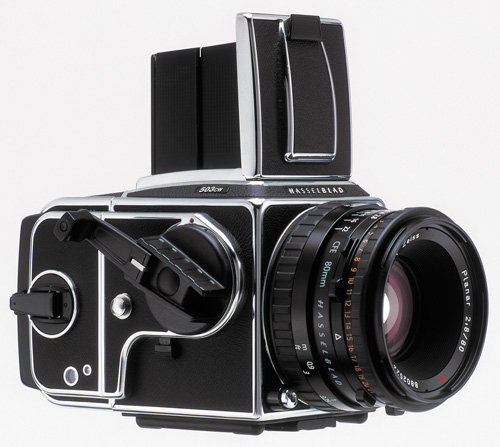 A certain amount of care needs to be taken with the CFV-39, as the sensor is bare to the elements. Yet going digital is simply a matter of attaching the CFV-39 to the camera body in much the same way as a film back. Yet with this one you get the advantage of an LCD screen to see what you’ve shot. Operation is simple, you switch on, you change the parameters in the menu for ISO, and the camera model that it is mated to, and away you go. There really isn't much to change: 'film speed' and lighting conditions (white balance). Access to all variables is extremely easy to navigate.

Power comes in the shape of readily available rechargeable Sony infolithium L batteries, as seen on camcorders. Rated at 8 hours, the lifespan really depends on how much reviewing you do in the field. Still, no problem taking hundreds of shots before worrying about the charge indicator on the rear screen. The CFV-39 also comes with an attachment for extending the battery from the body to work certain rogue models, including the 903SWC and to allow for larger, higher capacity batteries.

This system is portable, but a lot of its life, I suspect, would be in a studio. Here it can be tethered to a workstation using FireWire – and be powered this way – to pump images straight to the screen for critical lighting changes and instant approval. Traditionally Hasselblad systems were 6 x 6cm film. This gave you enough resolution for page spreads in magazines - allowing the designer to crop it vertically for the cover of horizontally for the inside spread. Photographers got used to leaving it a bit loose so that the layout could be dictated later.

The 80mm lens on a 6x6 negative was the rough equivalent of a 44mm lens on a 35mm system. It’s wide-ish, but close enough to be involved. The sensor on this system, however, is rectangular, landscape aspect. It’s worth bearing in mind that you could do with the crop marks before you press the trigger. Speaking of which, it still fires the shutter mechanically, and capturing on the CFV-39 is activated mechanically, too from inside casing of the body. The electronics may have advanced but the shutter and mirror still clatter like none other – letting you know the image is on its way. 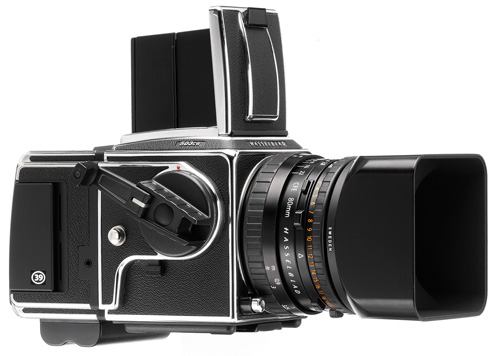 ...transformed by the addition of a digital back

Most older cameras in the V system had no metering onboard, they were designed for people who control all the light in the scene, or meter by experience and a keen eye. Despite the pairing of technologies 50 years apart, it is still about getting the light right across the recording medium. What the CFV-39 gives allows with these old film cameras the choice of film type – effectively changing the white balance and density of the blacks/highlights/midtones too.