The HMX-U10 also has a weird side-mounted tripod bush. To mount the camcorder vertically on a tripod, you need to use a supplied adaptor. When it comes to handling, the HMX-U10 certainly feels dinky, measuring 56 x 103 x 15.5mm and weighing around 95g with battery. Two rather flimsy plastic lugs hide the SD card slot/DC port, and AV and mini USB ports.

The back of the camcorder is dominated by a 2in LCD screen composed of 154,000 dots. Power-on to video recording takes around five seconds. Below the LCD screen are three buttons for video recording, playback and photo shooting. You simply press one of the buttons to initiate recording or playback.

The system works pretty well, but your eyes are naturally drawn towards a large OK logo on the back, which seems a more natural target to go for. But while we can forgive Samsung for adopting this mode operation, the same can’t be said for the HMX-U10’s touch pad and menu system; it is awfully frustrating to use. Sometimes, the touch control system seems so sensitive that, if you simply breathe on the HMX-U10, it activates something. Other times, you have to press the touch pad repeatedly to get a reaction.

The touch pad is used to call up a series of pull-down menus that are used to adjust various parameters, such as video resolution, backlight function, digital effects (such as black and white, and sepia), plus three iScene Modes (auto, sports, beach/snow). If your finger wanders just a fraction of a millimetre out of position, you lose the current menu and are presented with another. It’s truly a pain.

The problem with using a super-light camcorder and having no IS system, is that camera shake is a particular issue, and this was the case with the HMX-U10, even when using two hands to steady it. Whenever you shoot some video, the first several seconds suffer from wobble, and we lost count of the number of photo images that were ruined by shake. 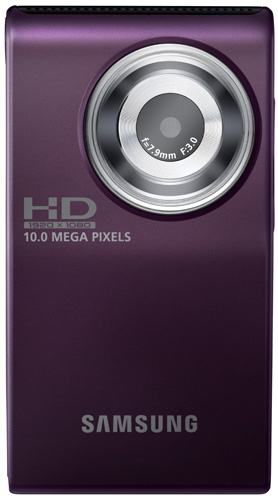 You also get a 4x digital zoom, but this is best ignored, because not only does it reduce picture quality, but the touch pad interface induces even more camera shake. Sound quality wasn’t much write home about but photo quality seemed fine outdoors. Yet indoors, the lack of flash, a slow, fixed focus lens and slow shutter speed all conspire to produce disappointing results.