The FX100 Zero Client has no x86 CPU, no hard disk drive, and no image to manage. Instead, it simply acts as a terminal to a virtual environment running on a remote server.

The system was previously paired only with a Dell Precision R5400 Rack Workstation as a one-to-one link, but it now ships with firmware supporting VMware View 4.0. The VMware software sports a new communications protocol called PC-over-IP that enables real-time screen rendering and can purportedly scale to tens of thousands of virtualized desktops. 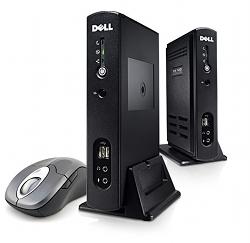 That means multiple FX100 devices can now connect to a single server. The fan-less, driver-less box itself handles only base input and output, like audio, USB, DVI, display, mouse, and keyboard connections. According to Dell, the FX100 consumes just 30 watts.

Despite the minimal hardware involved, Dell's zero client price tag doesn't exactly go easy on the zeros. The device starts at $500 a pop. The remote access host card is $300. The question, of course, is whether plugging bare-bones zero client hardware into a centralized server will save money in the long haul versus buying a fleet of cheapo desktops for the workforce.

Dell enters the zero client fray against a host of smaller firms and startups such as Pano Logic, ClearCube Technology, and Wyse Technology.

The Optiplex 980 adds Intel's new Core i5 and i7 processors into the Dell biz computer market. In addition to offering a solid state drive option, it also promises to please the Earth Mother with a "90 per cent energy efficient power supply" and containing more post-consumer recycled content than previous generations.

Optiplex 980 boxes are available in mini-tower, desktop, and small form factor chassis variants. They will become available worldwide "in the coming weeks," starting at $807, according to Dell. ®