The myth of Britain's manufacturing decline

It's all built in China now - except the clever stuff

Comment Woe unto us for we don't make anything any more. We've given up on manufacturing and that's what ails the UK economy. We must therefore invest heavily in a renaissance of making things that we can drop on our feet and all will be right with the world.

You don't have to be all that much of a newspaper fanatic to recognise that mantra: it's been repeated so often that it has become the received wisdom. We even have politicians advancing ideas about how we might manage to achieve the desired outcome. There is, however, only one teensie tiny problem with the whole idea. It ain't true. 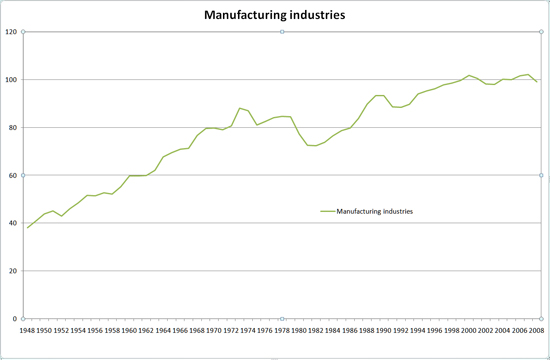 Build a better mousetrap and a myth will arise that you don't build anything anymore.

That's from something called the Index of Production and it's a chart of the value of manufacturing output in the UK since just after WWII. It's an index and 100 is defined as the level of output in 2005. As you can see we produce some two and a half times what we did in the 40s, when absolutely everyone, to hear the stories told, was gainfully employed making whippet flanges. So at first glance it would seem to be untrue that we actually produce less than we used to.

In a little more detail we could look at the very latest figures here. I've deliberately not included them in the chart because I want to show trends, not the effects of the latest recession. For yes, of course, manufacturing output has fallen significantly in the recession: just as it did in the 80s one and the 90s one. But as you can also see output rose above pre-recession levels soon after the end of said recession: there's nothing in particular to make us think that this won't happen again.

One other thing we might note from this chart: manufacturing output seems to be more volatile than GDP as a whole. During the current crisis it's fallen by nearly 15% and yet GDP as a whole has fallen by only around 6%. That rather puts paid to the idea that a concentration upon manufacturing will make the economy less volatile. It's even possible to see a (weak) relationship between more manufacturing in the economy and a larger fall in GDP in the current recession.

So, the prevailing wisdom seems to be wrong in certain important respects. As in directly wrong, and entirely inconsistent with this universe. We've not stopped making things and manufacturing does not protect us from recessions. So what has actually been happening with manufacturing?

The first and most obvious thing is to point out that the Index isn't measuring how much we make: it's measuring the value of what we make. This is, of course, the only thing we should be interested in: increasing the value of what is produced means that there's more value to be shared among all of us doing the producing. We can all have arguments about how that distribution is done, but the very definition of increasing wealth is that there's more value. Not more things, but more value.

The thing that's making that increased value is, well, actually it's all of you, the techies of this world. Once northeners in flat caps hammered out those whippet flanges, before posing for a Lowry painting on the way home. Now there are armies of you writing code and running workstations that help Rolls Royce design their single crystal nickel turbine blades for jet engines.

Alongside this, it is also gobsmackingly obvious that fewer people are employed in manufacturing than in the past. But we've got rising production and fewer workers: this is what is known technically in economic circles as a “good thing”. Another way of saying exactly the same is that we've got rising productivity. We're getting more value from each unit of labour employed. And as Paul Krugman (Nobel Laureate lefty economist) is known to point out, productivity isn't everything, but in the long run it's almost everything.

If we can manufacture using fewer people then there are more people to go off and do other things: write Grand Theft Auto, wipe babies' bottoms, whatever. Thus we can have, as a result of this rising productivity, more things to enjoy: video games and clean and smiling babies. This is another definition of getting richer. We've got two or three things rather than the mere one we had before.

A third thing is that manufacturing has fallen as a percentage of the economy. It is down to about 12% or so by some measures now, where once it was 50% (and China's is still around 50%). But as we can see from the Index, this isn't because manufacturing has shrunk: therefore it must be because other areas of the economy have grown faster.

None of this is to say that there haven't been problems over these years. Those made unemployed by the rise in manufacturing productivity have, at least sometimes, not had an easy time of it trying to find new work in the new services. Metal-bashing skills do not transfer easily to the NHS, and there are mining villages where virtually no one worked again after the pit closed.

But these are arguments for either slow changes, so that changes happen over the generations, or for more to be spent on retraining. What they're not are arguments that we should be deliberately increasing manufacturing as a portion of the economy.

The real point here though is the obvious and simple one: manufacturing in the UK has not shrunk. As it hasn't, then it's not possible to say that Maggie eviscerated it, that neo-liberalism closed it down or any of the other nonsense you see in The Guardian and points left. What has actually happened is that manufacturing has become more productive and moved higher up the value chain, both entirely desirable things. ®

Meizu ditched hole-free phone because it was 'just the marketing team messing about', not because no one really gave a toss

OK, whatever you say

Plus: Web access penetration static, according to ONS survey