According to Amazon, the DX will last as long on a full charge as the Kindle 2 does: a week with the wireless left radio on, two weeks with it off. That seems about right - we noticed no discernible differences in battery life between the two devices.

Before you start adding shipping costs, the DX will set you back $489 - £308 at the current exchange rate - or, put it another way, $230 (£145) more than the standard Kindle. That is a fair old chunk of change for an e-book reader, even one with a huge screen. 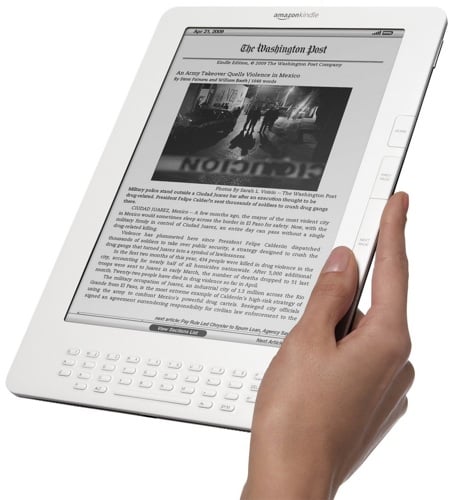 It also means the DX is pretty much the same price as the soon to arrive entry-level iPad. While the the iPad is not a dedicated e-book reader - making direct comparisons pointless - both devices are large screened handheld electronic gadgets competing for a finite discretionary consumer spend.

Another potential fly in the DX's ointments is Sony's hopefully-coming-to-Blighty-soon $399 (£252) Reader Daily Edition, which has a 7.1in, 600 x 1024 screen, 3G wireless communication, and PDF file support complete with variable text sizes and reflow.

Spend time with the 9.7in Kindle DX and your won't ever want to go back to a 6in e-book reader but blimey you've to pay a hefty price to be paid for such luxury. If money is no object, you won't regret the outlay, but you may want to consider waiting to see if the arrival of Apple's iPad causes Amazon to re-think its pricing strategy. ®