Lurid Pic More news of the stars today: snappers armed with extremely powerful lenses have secured pics of "a very intimate couple", "tightly bound" and "dancing around each other in a diabolic waltz" as the darker, dominant one strips the other. 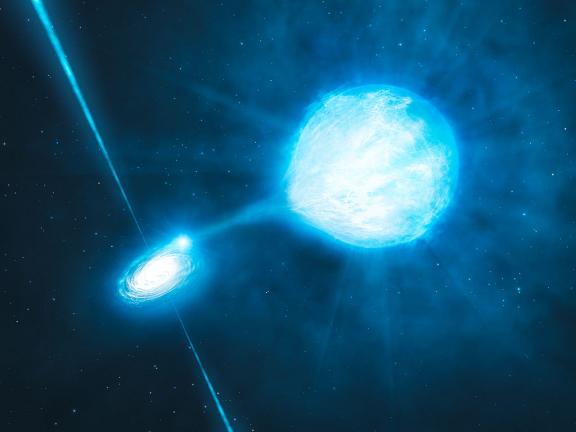 The pair in question are a so-called "stellar mass" black hole* and its twin, a Wolf-Rayet star perhaps 20 times as hefty as our own sun, located in the far-off galaxy NGC 300. The Wolf-Rayet star whips around the black hole every 32 hours, according to top boffins, with matter being pulled off it all the time by the intense gravitational field of its neighbour.

"This is indeed a very 'intimate' couple," says Open University astro brainbox Robin Barnard. "How such a tightly bound system has been formed is still a mystery."

Barnard and colleagues in the UK and Spain followed up on data from NASA and ESA space telescopes by using the European Southern Observatory's Very Large Telescope to confirm the activities of the extragalactic odd couple.

According to Dr Henri Boffin of the ESO, the newly verified NGC 300 black hole system (dubbed "X-1" for the nonce) is "one of only three such objects found so far". It was Dr Boffin, too, who came up with the "diabolic waltz" bit, for which we're very grateful.

The allied astronomers present their findings in a letter entitled NGC 300 X-1 is a Wolf–Rayet/Black Hole binary, to appear in the Monthly Notices of the Royal Astronomical Society. However, you can also read it for free courtesy of Dr Boffin: pdf here. ®

*That is a relatively reasonable sort of black hole on the same general scale as our Sun, produced when the remains of a very big star collapse on themselves after the star explodes. The other usual sort is an outrageously large "supermassive" black hole, one of which is generally found at the centre of a galaxy.