Remorseless German boffins announced this week that they have introduced robots which are under the control of chaos itself. 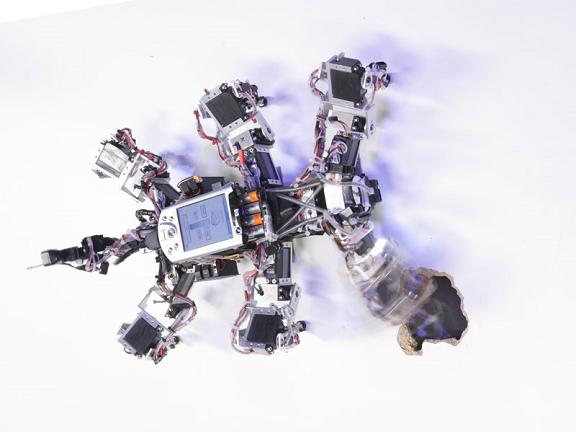 Quite literally no idea what it'll do next.

Apparently this doesn't involve remote control by butterfly wing-flaps from the other side of the world. Rather, brainboxes at the Max Planck Institute for Dynamics and Self-Organization in Göttingen say they have introduced "a small and simple network with just a few connections which can create very diverse movement patterns... a mechanism for 'chaos control'".

In humans and animals, periodically recurring movements like walking or breathing are controlled by small neural circuits called "central pattern generators" (CPG)... To date, typically one separate CPG was needed for every gait. The robot receives information about its environment via several sensors - about whether there is an obstacle in front of it or whether it climbs a slope. Based on this information, it selects the CPG controlling the gait that is appropriate for the respective situation.

The robot developed by the Göttingen scientists now manages the same task with only one CPG that generates entirely different gaits and which can switch between these gaits in a flexible manner. This CPG is a tiny network consisting of two circuit elements. The secret of its functioning lies in the so-called "chaos control". If uncontrolled, the CPG produces a chaotic activity pattern. This activity, however, can very easily be controlled by the sensor inputs into periodic patterns that determine the gait. Depending on the sensory input signal, different patterns - and thus different gaits - are generated.

Seemingly a chaos robot can learn autonomously to walk up a slope using as little energy as possible. When the machine tries to climb the hill a second time, it will immediately adopt the appropriate gait.

At the moment the chaos droids are particularly chaotic, as they have no memory of how to do the things they have learned using their chaos powers, and must thus learn every trick all over again every time. But the Göttingen boffins plan to fix that.

"As soon as the obstacle is out of sight, it no longer knows which gait to use," says Marc Timme, a top dynamics'n'self-organisation man at Göttingen. "Once the robot is equipped with a motor memory, it will be capable to use foresight and plan its movements."

For those wanting more detail, Timme and his chaos-robot colleagues Steingrube, Wörgötter and Manoonpong have penned a scholarly paper titled Self-organized adaptation of a simple neural circuit enables complex robot behaviour - just out in Nature Physics mag. For those who simply like robot movies, those can be viewed here ("Escaping from danger from behind"), here ("robot exploits chaos for self-untrapping") and here ("different gaits"). ®