Robocops on the prowl in Silicon Valley

A California police department is testing a high-tech defense against one of the most pernicious weapons used against them in recent years: the video camera.

Ever since Rodney King was famously videotaped receiving what many saw as an over-the-top thrashing by Los Angeles lawmen back in 1991, video footage of alleged police misconduct has time and time again come back to haunt overzealous boys in blue.

And now, the same folks who enabled 2007's immortal "Don't tase me, bro!" video are leveling the playing field with a camera-computer combo known as the Taser Axon - or, to use the less-subtle terminology of Taser International's marketeers, the "TASER® AXON™ ... a tactical networkable computer combining advanced audio-video record/capture capabilities worn by first responders" that's "designed for simple, easy operation even under extreme stress." 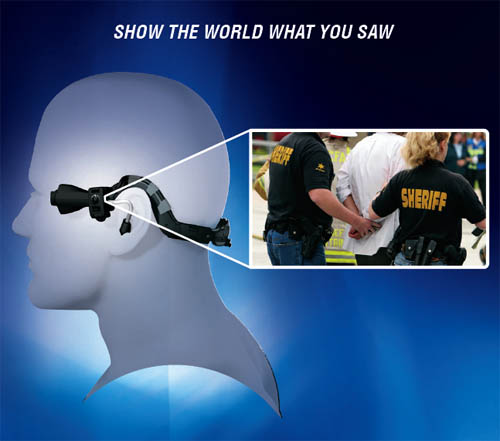 (It should be noted that the TASER® AXON™ has no relation whatsoever to the Axon guitar synth, robot microcontroller, trucking software, signal converter, shrink wrapper, or non-volatile programmable metallization cell memory for system-on-chip devices.)

According to a report by the Associated Press, the system is now being tested by 18 police officers in San José, California. With it, an officer can record any activity just as he or she is viewing it simply by tapping a chest-mounted button.

After the officer calls it a day, the camera's controller (in uppercase Taserspeak, its AXON™ TACTICAL COMPUTER) is placed in a docking station (the SYNAPSE ETM - evidence transfer manager) back at the precinct house, where its data is offloaded to a secure server and it's recharged to fight again on the morrow for truth, justice, and the American way.

The evidentiary advantages of such a system are obvious, but its value to individual officers of the law is more immediate: "People have been using [video cameras] against us for years, unfortunately only for the bad stuff," one San José police officer told the AP, "So it'd be nice to show our view and our side of what's going on."

The weak link in the system is, of course, that chest-mounted on/off button. As Skyler Porras of the American Civil Liberties Union told the AP: "We need to know, 'Are officers turning video cameras on at the very beginning of an engagement with a resident?'"

If appropriate procedures are instituted and followed, Porras admits, the in-your-face cameras could find a place in law enforcement. "If they are used appropriately and with proper protocols in place," she opined, "they could be useful."

In San José, the department is taking no chances. Officers testing the system are required to turn it on whenever they approach a taxpayer, even during routine traffic stops.

Of course, the system could be modified to allow for always-on use - but doing so would flood the precinct with useless video, and the oversight situation would quickly deteriorate to the level of useless footage now clogging the UK's CCTV-cam system.

You can find more details on the TASER® AXON™ system by downloading their brochure here (PDF). ®

What got breached this week? Ticket portals, DNA sites, and Atlanta's police cameras

Microsoft and genetics boffins predict genetics in the datacenter

You can find me in da club, database full of faces… but this ain't privacy watchers' jam

Facial recognition app promises to verify your age to bouncers

Secretions on your phone reveal your secrets

Chemistry laughs at your strong passwords