And, at 1.6kg to 1.4kg, it's the heavier of the two, too. Not that the T110 is a shoulder-killer - this is a mini laptop we could carry around all day - but nor is it as small and as portable as it might be. 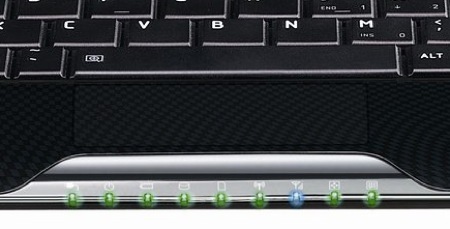 There's a trackpad in there, somewhere

Toshiba is clearly trying to make the T110 seem large, the better to make buyers see clear blue water between this machine and netbooks. The company wants to you realise immediately that this is a notebook.

So why the blazes did it choose that single-core Celeron 743?

Looking at the PCMark Vantage numbers, you can clearly see the disadvantages the T110's one-core CPU has when compared to the 1810TZ's 1.3GHz dual-core Pentium. The T110 is well behind, especially on the more content-centric tests.

Incidentally, during testing it ran hotter to the touch than the 1810TZ did, but no so much as to cause harm to any laps it may be resting on.

3DMark06 gives the T110 the better graphics score of the two, but, as you can see, there's not much in it, or with other laptops using Intel's latest integrated graphics.

Its slim, but not quite as slim where the battery is as this