The non-recoverable error rate is ten times better for Ultrastar than for Deskstar. 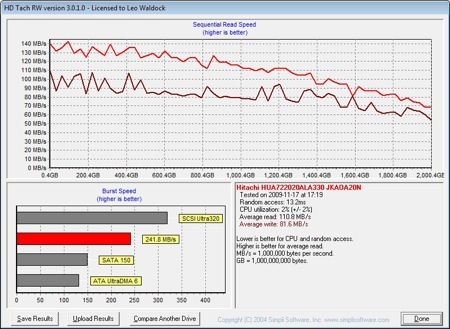 One figure we can easily understand is that the warranty for Deskstar is three years. The Ultrastar, however, gets a whopping five-year warranty. You have to wonder about the value of that extended warranty as current trends suggest that a replacement 2TB drive will be worth pennies by 2014.

And, as it happens, WD offers a five-year warranty on its desktop Caviar Black drives.

We tested the Ultrastar using a Core i7-based PC running Windows 7 Professional. We also dragged the 2TB WD Caviar Black out of the cupboard for some back-to-back tests.

The classic synthetic HD Tach 3 benchmark test shows the Ultrastar in a good light with an average read speed that nearly matches the Caviar Black and an average write speed that is faster than the WD drive.

CrystalDiskMark delivered more nuanced results, with a gap opening up in the three read tests that show the Hitachi to be slower than the WD. On the write side of things, the Ultrastar holds up its end in the sequential write test but in the 512KB and 4KB tests it falls behind significantly. 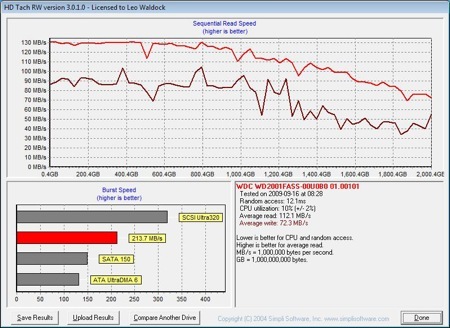 Iometer shows the Hitachi drive is ten per cent slower in Read IOPS than the WD and five per cent faster in Write IOPS.