Think you're tech savvy? You won't be when you're old

Daaad, nobody uses screens or keyboards any more 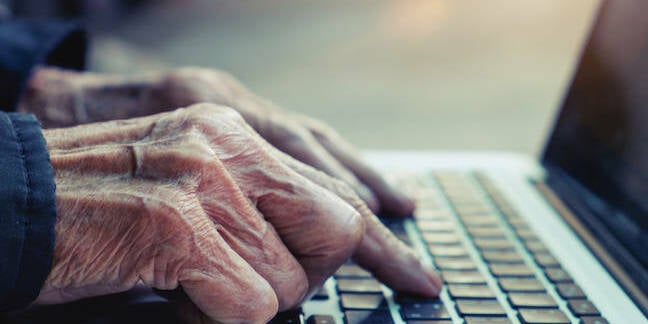 Psychologists in Florida say that greater efforts by web designers and gadget developers are necessary in order to prevent old people being cut off from the wired society - and add that this problem will get worse, not better, as today's tech-savvy adults will be at least as bewildered in their old age by tomorrow's tech as current oldsters are by mobiles and the web.

"The technology gap is a problem because technology, particularly computer and Internet technology, is becoming ubiquitous, and full participation in society becomes more difficult for those without such access," says psych prof Neil Charness of Florida State.

Charness and his sidekick Walter Boot have a five-year, $1.5m deal with the US National Institute for Aging to assist at the FSU Center for Research and Education on Aging and Technology Enhancement (CREATE).

According to the researchers, there's a massive drop-off in use of new tech after age 65 - which is bad news as, in their assessment, "almost everything is easier, cheaper or faster online". Facilities such as online banking, the profs reckon, would be of particular use to sometimes differently-mobile oldtimers, but they are actually less likely to use them.

Charness and Boot therefore issue a clarion call to web designers, saying that sites should use "high contrast backgrounds and text", "larger fonts" and "minimal scrolling". There should also be "navigation aids and instructional support".

Those involved in hardware design and programming of mobile phones should also think about the silver user, say the two profs. Here they call for "simplified menus, large fonts and buttons and external noise reduction".

And if you were thinking that this problem will go away once the current generations of pre-internet grandads and grannies have passed on, the profs reckon you'd best think again. By the time you're old, technology will have raced ahead, morphing and changing in ways that your weary noggin will struggle to grasp.

Just as today's old folk have often failed to adjust to the fact that a telephone is no longer a large fixed installation made of heavy bakelite and operated by cranking a rotating dial, you too will be left disoriented and cut off by the march of progress. All the dad-blasted whippersnappers will be effortlessly streaming multisense through their inter-cranial brain-to-cloud hookups, while you try desperately to find some information formatted for your treasured, antique 2D touchscreen.

There's some more from FSU here. A scholarly paper by the two profs is shortly to be published by Current Directions in Psychological Science. ®