Lightning by name, lightning by nature, Lexar's speedy offering was the second fastest drive we tested for writing, and posting the fastest read speed in CrystalDiskMark, though it lost a little ground in the real-world file transfer tests. But there's not a lot in it.

The Lexar's shiny metal casing - there's a thin rubbery band that runs around the edge to ensure a good grip - makes it a looker and gives the drive a solid, well-made feel. The lanyard loop is large and formed from the same metal as the case. The downside: the chrome-look metal shows up fingerprints and scratches in ways drives like the matte black Kingston DataTraveler never will.

The Lightning comes with Secure II, Lexar's Mac and Windows app that allows you to create a password-protected, encrypted archive, present as a file on the drive. It also includes Ceedo's virtual desktop app for Windows, which allows you to keep local, drive-only copies of software you need to access from any machine.

But there's the price: £100 officially, though we've seen it for as low as £70. But that's still a lot for an 8GB Flash drive, even one as quick as this. For its overall speed, the Lightning might well have won our Editor's Choice award, but not at that price. For a small sacrifice in speed you can save a heap of cash and gain considerably more storage capacity. 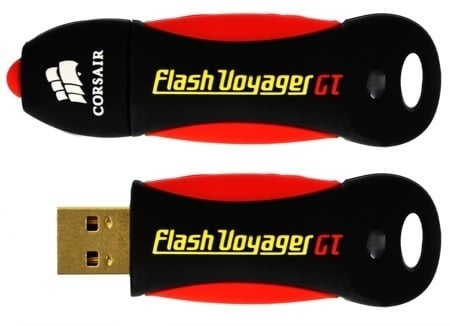 This Corsair offering may share the same name as its 128GB sibling, but it's a very different product, one the rivals all the others here other than its stablemate. Its colourful chunky rubber casing is much the same size as the other, more regular USB Flash drives included in this round-up.

When it come to write speed, it fared less well than the Lexar, but performed better at the file-transfer read tests.

There's no fancy but delicate connector retraction mechanism here, just a cap, and the 32's squidgy shell should be proof against knocks and bumps. It also extends at one end into a thick lanyard anchor loop, and the drive is one of the few we tested to come with a neck band, quite a thick one, in this case.

The cap forms a tight seal, but we wouldn't go so far as to suggest it's waterproof, so don't tip it into a tarn when you're out and about, OK?

This 32GB model doesn't come cheap, but you can have an 16GB version for around the same price as a lot of 8GB drives.