iPhone App Review Apple bundles a decent Dictionary application with Mac OS X, so it's surprising that it doesn't do the same with the iPhone. You may only need to consult a dictionary once in a while, but it's nice to have one handy. Putting it on a smartphone means you can always have it with you. Apple should have included one 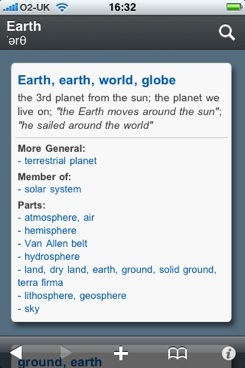 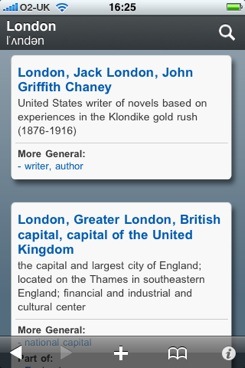 It didn't, and so a number of third-party developers have attempted to fill the gap. Some are derived from well-known dictionary publishers: Oxford, Collins, Chambers and so on. Others come from unbranded sources. As the Advanced English Dictionary (AED) app shows, that doesn't necessarily mean they're inferior to their famous-name rivals.

They're certainly cheaper. AED is currently available for a mere 59p, though publisher jDictionary Mobile says this is a special "90 per cent off" promotional price. Even at £5.90 it's good value given that you can pay up to £20 for a branded alternative.

AED is also one of the best-presented dictionary apps. The screen layout is attractive, the animations smooth, input is responsive. Words with multiple definitions are presented as a set of panels from which you slide and scroll from one to the next. It doesn't feel like a port of an app from a lesser mobile OS as a fair few iPhone dictionaries do.

There's no attempt to mimic the look of a paper dictionary. Instead AED uses the hyperlinking that computer-based databases make so easy to provide not merely a definition but a structured list of related words, allowing you to explore broader categories of word or drill down to more specific instances. 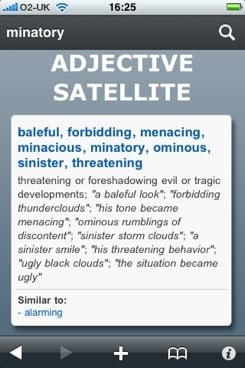 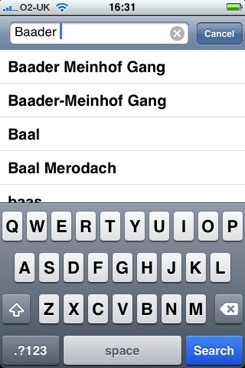 Look up 'Cheshire cheese', for instance, and a link will take you up the hierarchy to 'cheese'. From there, you can go up to 'food', 'solid food' or 'dairy product', or you can try out a selection of specific types of "solid food prepared from the pressed curd of milk". Curd is linked to too, as one of the substances from which cheese is formed.

Where relevant, definitions are accompanied by lists of synonyms and antonyms, so AED can be used as a thesaurus.

The related-words list isn't simply lexicographical. 'London' sits below 'national capital' and 'England' but above 'Big Ben', Old Bailey', 'Lombard Street' and so on. As such, AED has the feel of an encyclopaedia about it.

It's a novel approach and one that makes exploring a joy. It's not for everyone, though. While there's a search facility, it's based simply on the letters you enter and the order in which they're typed. 'Lio' will find 'lion' but not 'battalion', for example. And there are no wildcards, so stumped crossword solvers won't find succour here.

While AED provides word-usage examples, there are no out-loud pronunciations. Not all the words have visual pronunciation cues, either, or etymologies. It does well on scientific and medical terminology, and includes plenty of famous people, but it's weak on obscure words. British users may be peeved at its obvious leaning toward American English. 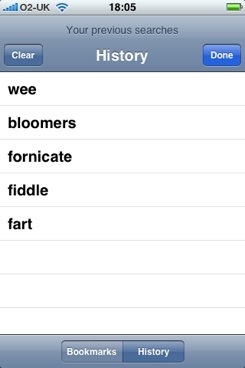 'I hope, sir, you are not using the first English dictionary to look up rude words'

Our test text was Jack Vance's Lyonesse, a fantasy novel noted for its linguistic richness, and AED came up short only occasionally: 'fane' (an ancient temple) 'jupon' (a tunic worn over armour) and 'gonfalon' (a heraldic banner) are absent, for example.

The problem for AED is that there's a free alternative, from Dictionary.com, that has found every word we've chucked at it. It's not as good an example of iPhone coding as AED is, being slow and occasionally unresponsive to taps, but then you're getting what you paid for. Despite its website branding, it can be used offline.

For simply looking up words, AED is the loser, but for exploring the language, it has the edge, the upper hand, the whip hand, etc, etc. ®

Compatible with iPhone OS 3.0
Tested on an iPhone 3GS

AED cleverly fits words into a structure of meaning rather than a simple alphabetical list. One for explorers of language rather than crossword buffs.
Price: £0.59 (limited time offer - then £5.90) RRP
Tips and corrections