VMworld This week's VMworld conference in San Francisco was the coming-out party for the thinnest thin client we've ever encountered, a sub-pint-sized desktop appliance from Pano Logic of Menlo Park, California.

Actually, according to the company's EVP of engineering Parmeet Chaddha, thin client - even emaciated client - isn't the correct term for the Pano Device.

Zero is quite descriptive of the Pano Device's complexity, although not of its capabilities. The Device is a black or silver almost-cube that's 3.5 inches square at its base, 2 inches tall, and weighs in at 1.1 pound. It has no microprocessor or graphics processor. Its role is merely to connect over LAN or WAN to VMware ESX-based virtual machines and present the user with a desktop view of that VM. 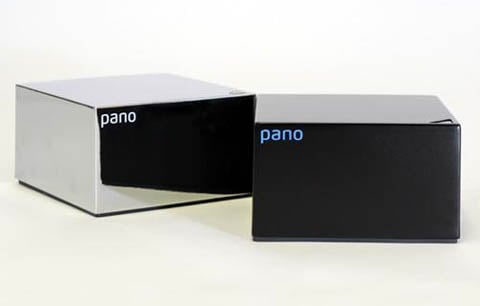 Thin's no longer in - zero's the new hero

The software suite that connects and controls the Pano Device is the aptly named Pano System. At the heart of the System is the Pano Manager, which sits between the Device and the Pano Direct Service, a lightweight Windows service that lives inside each VM.

The purposes of the Pano System are simple: control, centralization, security, and ease of use. As Chaddha told us, "If someone is looking to centralize 100 per cent of the compute cycles in the data center, then this is really the only game in town."

The zero-client definition, Chaddha said, is due to the fact that the Pano Device contains no processor, no software, no drivers, requires no patching, no configuration. "It is as dumb as a telephone," he said.

Since the Device has nothing stored in it, security is well-nigh absolute. "Somebody can walk away with it, but they couldn't do anything with it. The only way it's going to work is when there's Pano software on the back end to light it up."

The Device communicates with the System over a Pano-proprietary UDP-based protocol that Chaddha describes as being "where all the secret sauce lies" and that he claims ensures a seamless and snappy user experience when display, keyboard, and mouse are connected to the thoroughly dumb Device. "Think of this simply as a frame buffer," he said.

The Device contains one DB-15 VGA port that supports resolutions up to 1920x1200 (a DVI version is under development), one 10/100BASE-T Ethernet and three USB 2.0 ports, an internal speaker, one 16-bit audio-out mini jack (with video sync). Despite the presence of an audio-in mini jack, that capability is not yet ready. 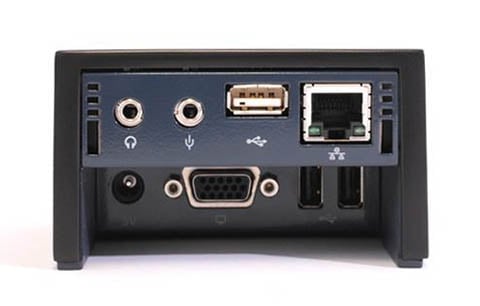 The host software will tell you which ports you can use

When the Device is plugged into the network, the System recognizes it by its MAC address - the Device itself doesn't announce its presence to the System, but is instead discovered by it. The MAC address is then associated with a dynamic IP address, a handshake is established, and the Manager will present a logon screen to the user, who will - you guessed it - log on.

At logon, the user is then presented with a VM desktop tailored to his or her level of assets and privileges as predetermined by an administrator. As might be guessed, groups are supported as well, as are such predetermined usage templates as kiosks.

Although the Device is dumb as a post, it can remotely service USB devices such as printers, storage, and smartphones, using smarts located in the VM. And, yes, the management software can disable port usage if desired.

Sales of the Device and its back-end System software are on a per-seat basis at $329 for the silver version and $319 for the black - but should you want to outfit, say, 1,000 desktops with the little guy, the Pano people say they'll be more than happy to negotiate. ®

The Reg salutes Pano Logic for its rational product-naming system, which blessedly avoids such silliness as iBac, vRanger Pro, and esXpress.