So there we have it, the new Intel SSD is a triumph when it is compared to its predecessor. In terms of performance, it is beaten by the likes of the Patriot Torqx, but the low price of the new Intel drive makes it a better overall deal. 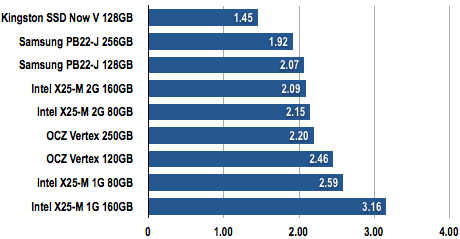 That should be the end of the matter. However, Intel announced a worrying problem with the initial release of the new SSD. If you set a Bios protection password, then change or disable the password and then turn off the power, "the system may become inoperable".

We thought we’d try to replicate the issue. We created, changed and deleted Bios passwords with gay abandon and found absolutely nothing amiss. We wouldn’t suggest you ignore Intel’s warnings, but it seems to us that the issue isn’t as cut and dried as change password, lose data.

Fortunately, Intel has now posted a firmware fix, taking the drive's on-board software from 2CV102G2 to 2CV102G9. That, it says, is all you need to be safe.

Intel’s 34nm Flash memory die-shrink has increased the performance of its revamped X25-M and at the same time made the SSD much cheaper. Excellent news. ®

Intel’s 34nm Flash memory die-shrink has increased the performance of its X25-M - and made it much cheaper.
Price: £334 RRP
More Info: Intel's X25-M SSD page
Page:
Tips and corrections
6 Comments