This latest version of the (still white) MacBook is available in just one basic configuration, priced at £749. That’s a slight increase on the previous price of £719, but the Core 2 Duo processor has been bumped up to 2.13GHz and the hard disk goes up from 120GB to 160GB. The memory stays at 2GB, but the bus speed has increased from 667MHz to 800MHz. 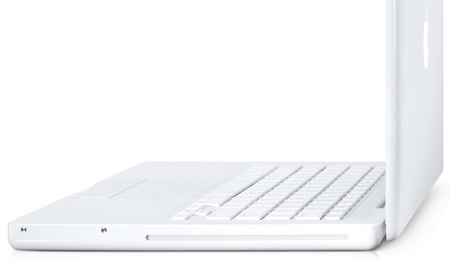 CPU and HDD capacity tweaks are the only changes

Everything else remains the same, including the 8x DVD/CD burner, two USB 2.0 ports, single Firewire 400 port, built-in webcam, 802.11n wireless networking and Mini DVI for connecting an external monitor. There are ‘build to order’ options for adding more memory or a bigger hard disk, but the processor speed is fixed.

This is obviously a relatively minor upgrade then, but our Mac benchmark tests do show a worthwhile increase over the performance of the previous model. Graphics performance seems to come off best, with frame rates in Doom 3 increasing from 47fps to 55fps – an improvement of 17 per cent.

This time, we also used the Mac’s BootCamp option to install Windows on the MacBook and run a few PC benchmarks on it as well. Performance here was quite respectable too, so the machine makes quite a decent box - whatever operating system you run on it.

Battery life remains the same as that of the previous model – we got a little over three hours when playing H.264 standard-definition video straight off the hard disk, and a further hour on top of that for less demanding tasks such as running Microsoft Office or doing some light web surfing.

Mac-haters will no doubt point out that there are cheaper Windows laptops available – not to mention countless Windows netbooks – but that’s missing the point. Apple’s intention with the MacBook is to offer a laptop powerful enough to handle a spot of video-editing and other multimedia work, at a price that will appeal to consumers. On that score it succeeds. Admittedly, the redesigned 13in MacBook Pro looks mighty tempting if you’ve got the extra spare cash, but the MacBook remains an attractive entry-level Mac OS X system. ®

An uninspired update. But while the price is fractionally higher, you do get a better entry-level Mac than the last one.
Price: £749 RRP
More Info: Apple's MacBook page
Page:
Tips and corrections
6 Comments