Who will win the epic battle for the kitchen OS?

Like to sing along to something as you cook dinner? Know this - the humble kitchen radio is about to be obliterated by the mighty Media Phone, with embedded specialist Arc bidding to become its default platform.

While the OS platforms for mobile phones and small cheap computers are the subject of fierce debate, the choice of OS to run in the kitchen remains an open field, with few players even realising the battle has begun - the ideal time for a new player to launch itself as the ideal solution. Let us not forget that a long time ago Bill Gates reckoned the kitchen would be the natural environment for the PC. 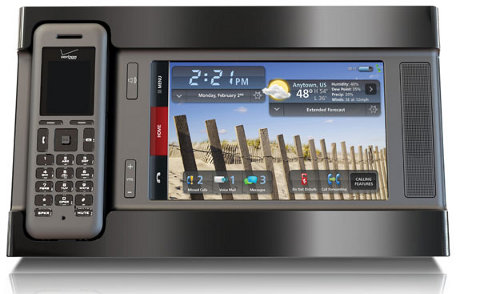 The next OS battle ground - beside the biscuit tin

The Media Phone is basically a telephone with a screen; anyone old enough to remember the ICL One Per Desk will know the concept, only this time it's aimed at the kitchen radio.

ARC makes embedded systems from the silicon up, and has released a new stack that incorporates everything from chips to audio and video drivers. The OEM just provides a box in which to put the hardware, and the small matter of a user interface, and they've got a Media Phone.

ARC reckons its experience with audio is going to help a lot here, though devices like O2's Joggler and Verizon's Hub (pictured above) are already heading into the same space.

The Joggler and other competition are heavily biased towards widgets and online content; which makes sense for a gadget that should be able to rely on mains power and always-on connectivity, but Arc doesn't provide the GUI, let alone the kind of AJAX widgets that will surely define the worktop computing environment. Arc might be able to provide the chips and an OS, but OEMs looking to source a widget engine might find themselves an alternatives to those too.

It's inconceivable that we won't see Android in this space; and Symbian could also be well placed if it could find the time. Instat reckons 31 million Media phones will generate between $4bn and $8bn from consumers come 2013, with business spending $3.3bn. If those figures are even half right, that will attract Microsoft's attention too.

Arc's platform is based on its own chips, its own OS and its own stack - the kind of proprietary solution that used to be so popular but now risks finding itself standing alone in the kitchen at the end of the party, at best. ®