NSFW We're not quite sure what to make of this particular packaging outrage, but what it's lacking on the excess cardboard front, it more than makes up for it in the trouser department.

Warwick Uni's Jaroslaw Zachwieja describes himself as "surprised" to discover that, on unpacking his shiny new Western Digital "1TB MyBook _Essential_ edition", instead of a power supply someone had thrown in five USB cables "and a little note": 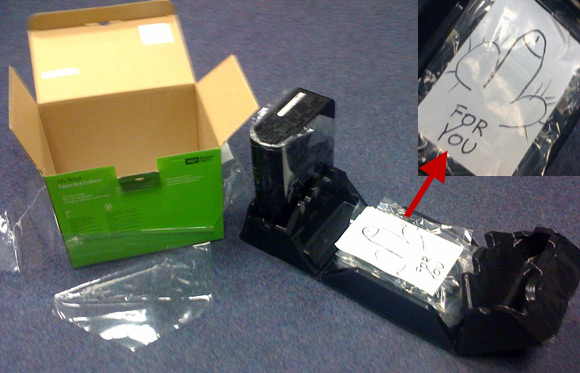 Good Lord. Jaroslaw says the box was "factory sealed" when delivered, and another two identical drives which arrived with the same delivery were "fine".

We emailed WD last week for a comment, but as of this morning the company was remaining tightly-zipped on the matter. ®

Fans of our previous planet-busting packaging outrages, including these classics, will be delighted to learn we're planning some more shock unboxings for later this week. Watch this space.