Review On the outside, there's little to distinguish the Asus Eee Box B206 from its predecessor - put the two side by side and you'd be hard pressed to spot the difference. The only real external clue is the DVI connector on the back of the original Eee Box has been replaced by an HDMI port instead. 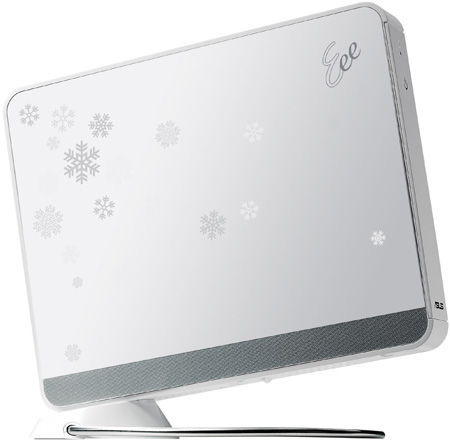 It measures the same slim 27mm wide and stretches 222mm front to back and 178mm tall. In situ it takes up slightly more space because the included stand has a footprint around 104mm wide and the fan design means it's not recommended to use it without it. The front switches and ports are hidden from view behind a folding flap. Push it back and you'll find a power switch, a 5-in-1 memory card reader (SD/SDHC/MS/MS Pro/MMC), two USB ports and headphone and microphone sockets.

Although the flap conceals the physical connectors, it lets the hard drive and power LEDs shine through. If you're considering plonking one next to your big screen TV in the lounge, bear in mind that the blue power light blinks constantly while the machine is in standby – a likely distraction if you're just watching regular TV.

Round the back there's a connector for the Wi-Fi antenna, a power socket, HDMI, two USB ports, Ethernet and an audio line out port that also doubles as a digital SPDIF socket using the supplied adapter in the box.

This revised Eee Box is powered by the same 1.6GHz Intel Atom N270 chip as before and 1GB of DDR II memory. Featuring a 160GB 3Gb/s SATA drive, the hard disc capacity has now doubled and networking speeds won’t be an issue either with its 802.11n Wi-Fi and Gigabit Ethernet. Incidentally, there's no sign of the Express Gate quick boot interface that was seen on its predecessor. Hit the power button and after the usual wait you're thrown straight into Windows XP Home Edition.

HDMI replaces the DVI interface on the previous model

With the B206, Asus has also included a remote control should you wish to seat it among your other AV kit in your lounge. The infrared receiver isn't built into the main body of the machine – an advantage if you plan to tuck the machine away inside a cabinet. On the downside, using the receiver involves an extra cable dangling from the back that also takes up a USB socket.