How the LCD lost its Daddy

'When your passion leaves, you need to leave with it'

Unfortunately, in the mid-1960s, integrated circuits weren't up to the task. But Heilmeier knew that once they were, he had a flat-panel TV on his hands. When he unveiled the technology four years later at that 1968 press conference - showing off a few reflective alphanumeric displays and a window that turned opaque when you applied a current - some saw the possibilities. But RCA wasn't among them.

"The Japanese manufacturers recognized what we were doing and what it might lead to, but RCA had a little trouble. Not at the top of RCA, not at the David Sarnoff-level, but among people that were playing the internal politics shall we say...They didn't quite realize where it might lead once the integrated circuit caught up."

As RCA dilly-dallied, Heilmeier suggested he create his own company around the LCD. But RCA wouldn't have it. "They told me that if I left RCA to start my own company, it would be the biggest mistake of my life because they would sue the hell out of me." 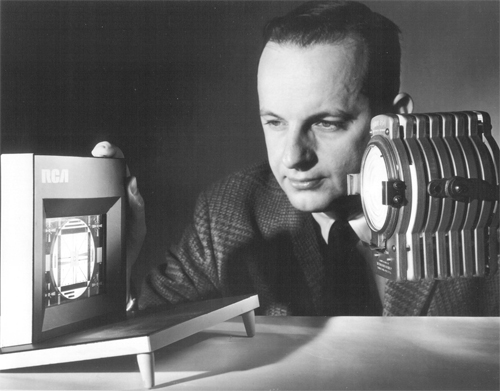 George Heilmeier and an early LCD

The situation came to a head one rainy New York night as Heilmeier and two top managers took a limo home from the company's headquarters. As Heilmeier rode in the front seat, the two were in the back discussing his research as a means of "winning points" with a colleague. "I thought 'This is sick,'" he says. "And I told me wife 'I've got to get our of here. I've lost my passion for the whole thing.' When your passion leaves, you need to leave with it."

In 1970, he joined the White House Fellow program, becoming a special assistant to Secretary of Defense. By 1975, he was running DARPA, the Defense Advanced Research Projects Agency, and in 1983, he took over as chief technology officer at Texas Instruments, a post he would hold for the next eight years.

Meanwhile, RCA never did grasp the importance of the LCD. But the Japanese eventually took it to market - in spades. Not that any of this interests George Heilmeier one way or the other. He and his passion left liquid crystals almost forty years ago.

But there are times where he wonders what would have happened if RCA had let him start his own business around the LCD. "They never got a return on investment," he says. "The project never had same kind of passion that we had in the beginning." ®

The Great IoT Protocol War may have been won: Thread's 1.2 release aims at business

Analysis Meanwhile in the home, it's all Google, Amazon, Apple…

This is not, repeat, not an April Fools' Day joke: 5 UK broadband vendors agree to pay YOU daily rate for fscked internet