The European Space Agency (ESA) has confirmed that both the electric ion propulsion engines aboard its Gravity Field and Steady-State Ocean Circulation Explorer (GOCE) satellite are "performing nominally". 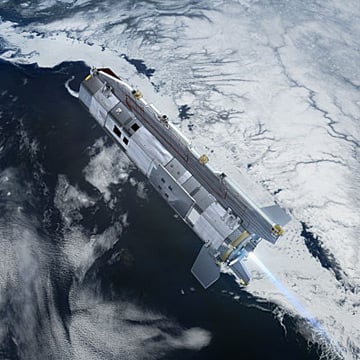 The "cutting-edge" drives - built by Qinetiq - are designed to compensate for "the tiny amount of drag generated by the few wisps of atmosphere at GOCE's orbital height".

ESA explains: "This cutting-edge system does not burn fuel like a regular rocket motor. Instead, it is supplied with xenon from a 40-kg tank, which is converted to fast-moving ions - naked xenon atoms that have had some of their electrons stripped away by an electric discharge generated from solar energy. The ions are ejected toward the rear, giving a very gentle, steady and smooth thrust."

This thrust represents a "fantastically small force" of between 1 and 20 millinewtons (mN), but that's enough to maintain GOCE's "free-fall" orbit - currently decreasing at a rate of around 190 metres a day from an altitude of roughly 280 km.*

Spacecraft Operations Manager, Juan Piñeiro, said: "On Tuesday last week, we fired the B-unit of the electric ion propulsion, stepping it through 1, 3 and 8.3 mN of thrust. On Thursday, we fired the A-unit. Both are performing nominally."

All being well, the engines will - as part of the Drag-Free and Attitude Control Subsystem (DFACS) - automatically maintain GOCE's velocity and altitude while the scientists get down to the job in hand.

GOCE Mission Manager, Rune Floberghagen, explained: "Next comes the 'wake up' for the instruments, which puts us in the position to start operating the first-ever gradiometer to be flown in space. After confirming they work, we will be ready for intensive testing of the satellite and of the scientific data-processing system on the ground."

The gradiometer is designed to produce an accurate gravity map (geoid) of Earth. This will allow a better understanding of how our planet's gravity affects dynamic processes such as sea level trends, ocean circulation and tectonic movements. ®

*As we understand it, GOCE is currently in free-fall orbit descending to its final operating altitude of around 260 km, at which point the scientists will doubtless require it to stop free-falling into someone's back garden. We're happy to be corrected on this point if that's not the case.