Review The E75 is the first Nokia smartphone to feature a slide-out Qwerty keyboard and style-wise it would appear to be a sort of cross between the conventionally sliding E66 and the E90 Communicator – the latest incarnation of Nokia's long-established hinged Qwerty-keyboard business phones.

Around the sides are a micro USB port and Micro SD memory card slot - it comes with a 4GB card to boost the phone's 50MB of on-board memory - both covered with rubberised grommets, plus camera shutter and volume buttons, a dedicated voice commands button and a 3.5mm audio jack at the top. Round the back is a lightly ridged metallic cover, similar to the one on the E66, but this time with a 3.2Mp camera with LED flash and self-portrait mirror.

Unusually for a Nokia business phone, there's no infrared port and Nokia has again left off its power button à la the E63 – you hold down the call end button, just like almost everyone else's phones these days.

The keypad is a little cramped, especially the three keys right at the bottom, which can be a bit tricky to reach with your thumb. Three of Nokia's standard E-series shortcut keys - home, calendar and messaging - are ranged around the square navpad, but contacts has been replaced with a delete button, which seems an odd choice for a phone with an alphanumeric keyboard, especially since there are a couple of soft-menu keys present, one of which could easily serve as a delete button for when you're punching in phone numbers. 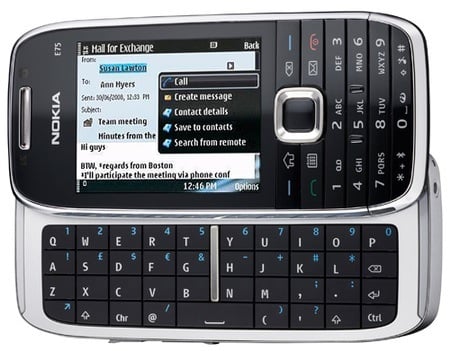 ...turns into an HTC-style Qwerty slider

Which brings us neatly to the keyboard. It slides out to the left with a crisp, assisted action. The upper part of the phone feels a little flimsy when the keyboard is exposed - so that's where they've saved the space - but there's no worry that it might snap or anything. It's probably just that we're used to heavier brutes.

BlackBerry's comeback: El Reg gets its claws on the QWERTY KEYone