Popular cameraphone to be updated?

Reports are coming in that LG has designed a successor to its Viewty cameraphone. The new handset has already been unofficially dubbed the Viewty II. 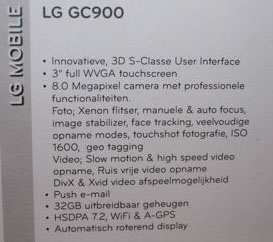 What technological treats are in store? For starters, the phone will be fully touch-operated using a 3in display with an auto-rotate capability. It's said to sport a "full WVGA" resolution - so possibly up to 800 x 480. The main menu will, unsurprisingly, be based on LG’s 3D S-Class interface – as seen on the LG Arena - which guides you through features using a 3D cube.

You’ll also be treated to an 8Mp camera – with manual and autofocus options - that works alongside a selection of tasty imaging treats, such as image stabilisation, face tracking, geo-tagging and a top ISO sensitivity of 1600.

Smile shot and blink recognition will also reportedly be included, while the phone should have 32GB of on-board storage.

Mobile internet will be possible courtesy of support for HSDPA 3G connections of up to 7.2Mb/s. Wi-Fi will also be present.

A launch date or price haven’t been confirmed yet. ®