NASA's Chandra X-ray Observatory has detected what the agency describes as a "surprisingly active" ancient pulsar - the oldest such body ever spied in the X-ray band and still radiating after around 200m years.

PSR J0108-1431, aka J0108 for those in a hurry, lies at around 770 light-years from Earth. It's an "isolated" pulsar (not caught up in a binary system) formed when a star substantially more massive than our own Sun collapsed in a supernova event to form a diminutive but very dense, rapidly-spinning neutron star. 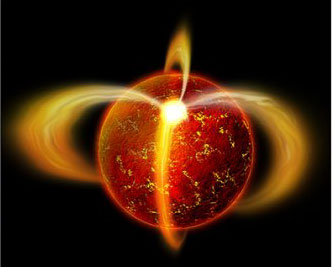 As such neutron stars spin, they emit "pulses" of radiation "similar to a lighthouse beam" (see artist's impression, right) - hence their name. Initially, they will rotate hundreds of times a second, but slow as they dissipate their energy.

J0108 has now slowed to a speed of "slightly faster than one revolution per second", although it continues to be "much brighter in X-rays than was expected for a pulsar of such advanced years".

George Pavlov of Penn State University, who examined the old timer via Chandra, said: "This pulsar is pumping out high-energy radiation much more efficiently than its younger cousins. So, although it's clearly fading as it ages, it is still more than holding its own with the younger generations."

NASA explains that J0108 is likely producing two forms of X-ray emission "emission from particles spiraling around magnetic fields, and emission from heated areas around the neutron star's magnetic poles".

It continues: "Measuring the temperature and size of these heated regions can provide valuable insight into the extraordinary properties of the neutron star surface and the process by which charged particles are accelerated by the pulsar."

J0108's high-energy days are almost over, though, as it approaches the “pulsar death line" at which the pulsed radiation ceases and it'll become "much harder, if not impossible, to observe".

The dying pulsar is currently making its way south from the plane of our own Milky Way galaxy at around 440,000 mph - a speed described as "close to a typical value for pulsars". It's not in excess of the galaxy's escape velocity, however, and will eventually be pulled back north.

There's more on the Chandra J0108 observations and complementary work on the body by other scientists here. ®