Let us entertain you

MWC: It's the first morning of the mobile industry shindig in Barcelona, but Sony Ericsson couldn't resist jumping the gun by announcing a couple of new handsets last night - even if the interesting one isn't actually going to be available until Christmas.

It's still too early to tell how the economy is affecting business here in Barcelona. Companies booked their stands before the meltdown so are trying to hold a brave face, even if there are noticeably fewer faces on each stand. But the big players are still planning big news, with just about everyone announcing an application store at some point in the next few days and Microsoft's badly-kept secret being unveiled this afternoon.

But those big players are also worried, behind their grins: no one is prepared to bet who's going to come out the other side of the forthcoming squeeze, and even the household names are worried about the future.

Sony Ericsson wants us to know they are about "love", and communication and entertainment: they mercifully refrained from using the word "communitainment", but we suspect it's just a matter of time. That means putting brands together, and shrinking the product range as well as pre-announcing a couple of handsets.

One of them is being launched at the show, so should be available soon; the W995 is a standard affair if pretty enough. Much more exciting is the Idou (a working title, apparently), Sony Ericsson's first bash at a S60 v5 device with a big screen and finger-driven interface.

But the company tried hard to draw attention away from the hardware, which was good considering the Idou will be lined up for Christmas: the point about this new kit isn't that there is so little of it - shrinking the product range makes sense in the current climate - but that the Idou sports both the Cybershot and Walkman brands, something that Sony has hitherto prevented happening.

Sony Ericsson contends this is because it's never before been able to achieve the requisite quality in both sound and imaging, but a cynic might suggest that it's time to squeeze all the value out of those brands while they're still worth something. 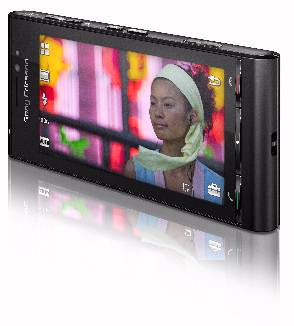 All I want for Christmas is a S60 version 5 handset from Sony Ericsson, what luck!

Sony's presence in the partnership doesn’t appear to go beyond awarding brand marks; Sony Ericsson made much of the ability to link the new handset to a PS3 for playback, but that's utilising the DLNA standard and owes nothing to Sony. It would have been nice to see support for BRAVIA Sync, which makes connecting a Sony video camera to a Bravia television such a breeze, but of that there was nothing.

At least there should be plenty to watch, Sony Ericsson will be adding movies to their Play Now product - enabling subscription-based access to a movie library, watch as much as you want for a monthly fee. Once it's got operators to roll out with that should be interesting, but the company wasn't being drawn on the details as yet.

Announcing products so early in the cycle is not typical. It might calm investors and demonstrate that the company has a plan, but when that plan involves announcing a state-of-the-art handset that won't be available for nine months - time enough for the competition to leapfrog the company - they might not be as relaxed as Sony Ericsson would like. ®