And we thought we had global warming

The Hubble Space Telescope has detected carbon dioxide (CO2) in the atmosphere of a planet orbiting a star 63 light years away. NASA says this is "an important step toward finding chemical biotracers of extraterrestrial life". 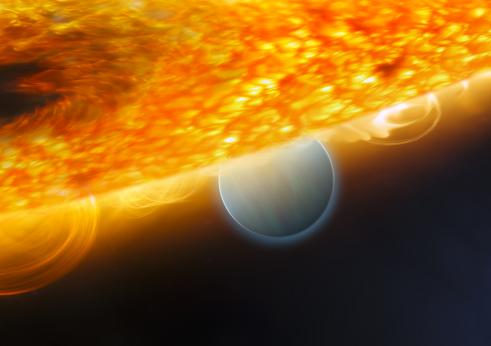 The planet in question is of the type known as a "hot Jupiter", because such planets are like Jupiter but much hotter*. It is a huge ball of gas rather than a solid world, and orbits so closely to its sun that the year is only a couple of Earth days long. Its parent star, the orange dwarf HD189733, lies in the constellation Vulpecula.

NASA freely admits that life could never survive in the boiling gaseous hell of gas giant HD189733b, but they say their ability to spot CO2 at this kind of distance is significant as carbon dioxide is sometimes associated with life.

"The carbon dioxide is the main reason for the excitement," said NASA's Mark Swain.

"Under the right circumstances, it could have a connection to biological activity as it does on Earth. The very fact we are able to detect it and estimate its abundance is significant for the long-term effort of characterizing planets to find out what they are made of and if they could be a possible host for life."

One does note, however, that the presence of carbon dioxide isn't a particularly sure marker for the existence of extraterrestrial life. The atmosphere of dead Venus, for instance, consists largely of CO2, and that of lush Earth actually holds very little. It might be nicer if NASA had found a way of spotting free oxygen.

Be that as it may, the Hubble 'scope boffins sniffed out HD189733b's CO2 across scores of light years by looking at the near-infrared emissions of its super-hot atmosphere. They were able to subtract out the more powerful glare of the orange dwarf itself because the orbital plane of the gas giant is edge-on to our Solar System, so that the planet is eclipsed by its star every 2.2 days. This allowed the NASA brainboxes to get a good read on the star alone, and so remove its emissions from the combined picture when the planet was in sight.

"In this way, we are using the eclipse of the planet behind the star to probe the planet's day side, which contains the hottest portions of its atmosphere," said NASA's Guatam Vasisht.

The space agency's planet-sniffers believe they'll be able to use similar techniques with the planned James Webb Space Telescope, launching in 2013, to get similar readings on smaller planets - only a few times the size of Earth. These "super-Earths", perhaps home to races of tremendously strong superbeings bred in heavy gravity, will still need to have edge-on orbital planes for the observation to work. ®