Anyone for two GPUs and a full-gamut RGB display?

Within the benchmark app's margins of error, there's nothing to choose between Speed and Stamina mode beyond graphics, PCMark05 shows - or, we'd say, with other Centrino 2 laptops, typified here by the Dell Latitude E6400. 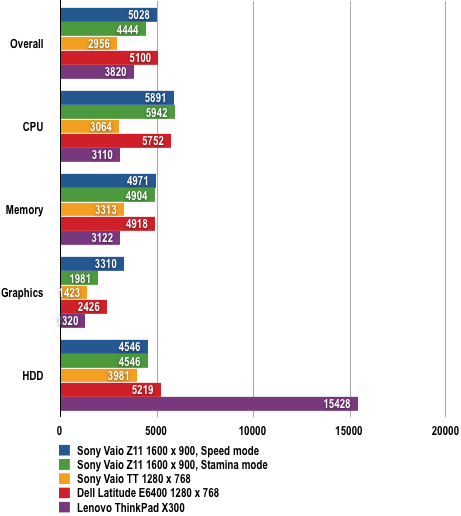 Incidentally, the ThinkPad X300 scored so well in the HDD test because of its top-of-the-line SSD.

We've seen how the Z11's two modes affect graphics performance, but what about their impact on battery life, which is what having them is really all about? As we saw with the Windows Vista Experience ratings and PCMark05 scores, all the differentiates the Vaio's two modes are the graphics core being employed.

We tried Stamina Mode first, again running our regular PCMark05 constant-run test, a benchmark that yields a worse-case result that's roughly half the real-world usage you'll get out of a machine.

Using the integrated Intel GPU we got just over two hours runtime out of the Z11 - 123 minutes - a disappointing figure that puts it behind the Dell Latitiude E6400. That said, four hours in the field's not too shabby.

Switching to Speed mode saw the battery life hit just under an hour and 50 minutes. Again, that means a real-world of three-and-three-quarter hours, more if you're not thrashing the GPU.