Turn the G1 on its side and push the display upwards, and the screen performs a curious out-and-back arc slide to reveal a five-line Qwerty keyboard. The keyboard feels solid and secure – for some reason after seeing the early pictures of the G1, we expected it to feel loose and wobbly – and the sliding action is both well weighted and well damped. 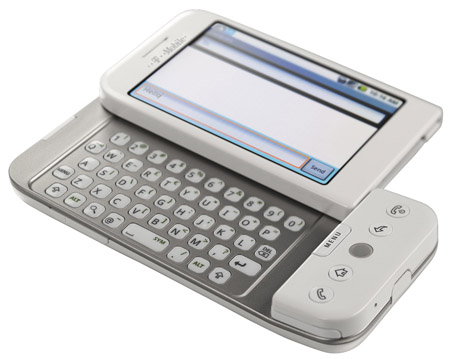 With the screen raised, the G1 looks a little odd, but truth be told it sits in the hands very nicely, allowing your right thumb to access the main controls while still being able to reach over and assist the left thumb with typing duties when required.

The G1's screen may be a little smaller than the iPhone's but it benefits from having the same resolution stretched over a smaller area and is every bit as clear, bright and crisp.

Phone cameras have never been an HTC strength, and the 3.2-megapixel job in the G1 won't change that. There's no flash and no video recording capability. It's still better than the camera in the iPhone, but that's not saying much. The screen mount has a habit of moving when you take pictures making it a hard to get a solid grip on the device unless held exactly right.

Signal reception with the Wi-Fi radio proved to be very good indeed as did the speed of the GPS receiver - all the more surprising as the system doesn't appear to be assisted, if the spec sheet is anything to go by. GSM reception was also well up to par, the G1 usually showing the same strength of signal as the HTC Touch Dual we held alongside it. Call volume and clarity were also fine, while the phone proved comfortable to hold against the head and in the hand. The little kink at the bottom of the handset doesn't actually makes any difference.