Applications designed specifically for touch will work best. It is hard to see how Windows can be designed equally well for mouse, touch and stylus control, since each approach has different requirements.

Older versions of Windows throw up an autoplay dialog when you connect a device such as a camera, phone or external drive. 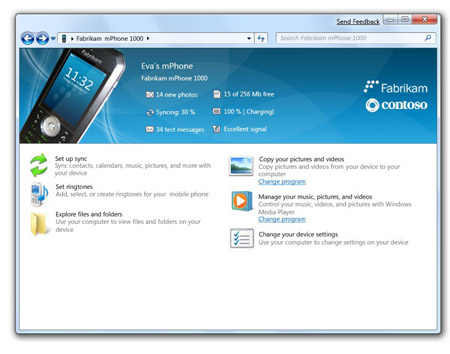 In Windows 7 device vendors can customize what happens on connection, through the new Device Stage, a control center tailored for a specific device. Some Device Stage links can be advertising for add-ons and supplies, so there is a commercial aspect that may not always be welcome. The Device Stage is populated via a Windows metadata service, which means it can be updated at any time.

The ancient Windows applets Paint and WordPad have been refreshed with a ribbon UI in the style of Office 2007, and Calculator is more sophisticated though ribbon-free. There is no sign of Windows becoming deeply ribbon-driven in this preview. 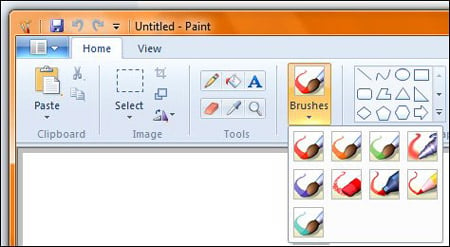 The Ribbon UI comes to Paint

Windows Media Player has the most significant changes, with support for new codecs including AAC, H.264, DivX and Xvid, and support for the Digital Living Network Alliance (DLNA) 1.5 media streaming standard, including transcoding where necessary. Under the covers lie more multimedia features, including a new animation framework and DirectX 11.

New features for business users include BitLocker to Go, which encrypts data written to removable drives such as USB keys, and Direct Access, a feature that requires Server 2008 R2, which enables users to access internal network shares over the Internet without using a VPN, secured with IPSec.

As for overall security, Microsoft has said little about it: it takes an approach similar to Vista, with UAC along with an Action Center that alerts the user to problems like expired anti-virus.

Windows 7 will be the first version overseen by Windows and Windows Live engineering group senior vice president Steven Sinofsky, who described the development process in some detail for us. He has a methodical and disciplined approach and I doubt we will see a repeat of the Vista debacle, in terms of slippage, bugs and massive code rewrites. Further, time has solved many of the problems with drivers and application compatibility that afflicted Vista.

This is shaping up to be a more robust and desirable release, though its conservative approach makes it seem uninteresting compared to Microsoft's new cloud efforts. ®