Review The upgraded successor to last year’s 6110 Navigator, the 6210 is a tidy slider-design handset, bearing more than a passing resemblance in looks and specs to the recently-launched 6220 Classic.

It’s another of Nokia’s S60 3.2 smartphones, packing in much of the functionality and applications found on Nokia’s higher-end N series. While high-speed HSDPA 3G mobile data connectivity is in, though, Wi-Fi is out on this model. 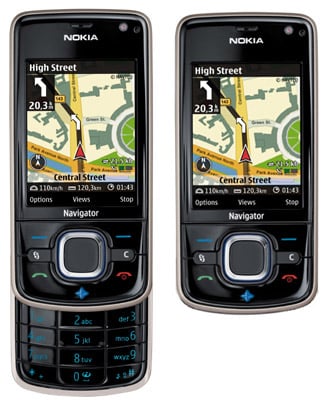 Nokia 6210 Navigator: equipped with HSDPA 3G, but no Wi-Fi

The main camera is a 3.2-megapixel affair with autofocus, a step-up from the original 6110 Navigator’s rather ordinary two-megapixel snapper, though a notch below the 6220 classic’s snazzy five-megapixel Carl Zeiss-branded shooter.

Satellite navigation is the zoom-in feature though. Following its recently completed multi-billion dollar purchase of Navteq, there’s no mistaking that Nokia is getting seriously serious about location-finding phones.

The Assisted GPS (A-GPS) set-up on the 6210 Navigator works with pre-loaded Nokia Maps software, and Nokia supplies a 1GB Micro SD card in the box containing maps of the UK and Ireland. In addition, Nokia includes a six-month licence for its Drive and Walk step-by-step navigation package, providing voice guidance to go with standard on-screen route planning and mapping.

A solid rather than ultra-slim slider design, at 117g the 6210 Navigator feels comfortably weighty in the hand without being too bulky – it measures a reasonable 103 x 49 x 14.9mm. Its slider mechanism is smoothly weighted too, and its glossy plastic numberpad and control panel feel responsive to finger dabbing.