There may be some readers out there who aren't entirely clear just what synchrotrons - enormous, kilometre-wide magnetic doughnuts used to thrash electrons within an inch of their lives - are actually for. Today, the news furnishes us with a partial answer - you can use a synchrotron to see old paintings hidden beneath other paintings. 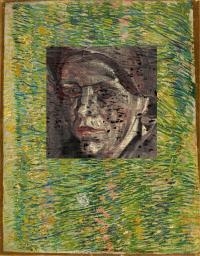 'Patch of Grass' - or actually just a
particularly vigorous bit of Tippex-ing?

This has now been conclusively demonstrated by boffins from Belgium and the Netherlands, who have used an immense German synchrotron to peer beneath the surface of the noted Van Gogh painting "Patch of Grass". By lighting the pic up with special extra-lively X-rays from "radiation source DORIS at Deutsches Elektronen-Synchrotron DESY in Hamburg", the spyray art-fancying brainboxes were able to expose a portrait of an unknown woman.

It isn't known what Van Gogh called the underlying painting, or indeed who it depicted, but we suggest that the subject might be codenamed "Doris" after the machinery which brought her to public view after a century of obscurity.

According to the Technical University of Delft, art historian Dr Joris Dik believes that the synchrotron X-ray demo will "pave the way for research into many other concealed paintings". We here on the Reg crypto-pic spyray desk expect to see a strong comeback of some sort from rival T-ray art-sniffer boffins, angered by the new school of synchrotron pic-probe upstarts.

Meanwhile there will no doubt be some grumblers who feel that, while an unknown Van Gogh picture is very nice, it may not quite provide total justification for the costs of building and running synchrotrons. The expenses of the UK's "Diamond" particle-punisher, and similar "big science" projects, have lately been blamed for a funding crisis in British physics and astronomy which has seen swarms of top boffins lose their jobs. ®